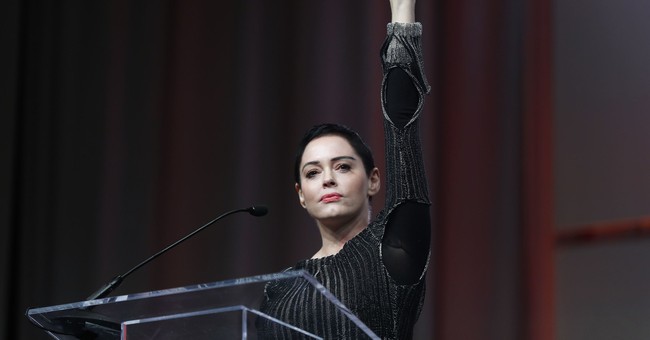 Rose McGowan spoke publicly Friday at the Women’s Convention in Detroit, for the first time since the Harvey Weinstein scandal broke. McGowan praised the #MeToo movement that is calling out sexual harassment and said it was time to “clean house” in Hollywood.

She opened by thanking “all of you fabulous, strong, powerful Me Too’s,” saying “we are all Me Too’s.”

“Hollywood may seem like it’s an isolated thing but it’s not, it is the messaging system for your mind,” she told those gathered, “it is the mirror that you’re given to look into.”

"In the face of unspeakable actions from one monster we look away to another. The head monster of all right now," she said, “and they are the same and they must die. It is time. The paradigm must be subverted. It is time. We’ve been waiting a very long time for this to happen, but we don’t need to wait anymore because we’ve got this.”

She also referenced a line from the leaked Access Hollywood video saying she spoke, “for all of us who’ve been grabbed by the m**ther**king p**sy. No more, name it, shame it call it out, join me, join all of us.”

McGowan was one of the women cited in the initial New York Times report about settled sexual harassment claims against Weinstein.

While McGowan didn’t comment for that article, she began a Twitter crusade against Weinstein and those defending him in Hollywood.

"I told the head of your studio that HW raped me," she tweeted at Jeff Bezos over an Amazon deal with Weinstein for one of her scripts which she said won Amazon a “dirty Oscar.”