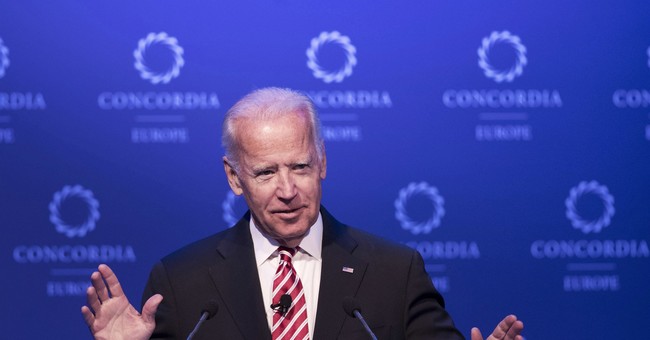 Former vice president Joe Biden sat down for an interview with Vanity Fair Wednesday on his upcoming book and a potential 2020 presidential run. Biden said that Hilary Clinton’s 2016 campaign lacked “joy” and also noted that former president Barack Obama was better with large crowds than he was with smaller gatherings.

In his book, Biden wrote that he felt a “twinge of sadness” for Hillary Clinton after she met with him to ask if he was running in 2016.

“The sage political analysts would say she was probably on her way to a historic victory—the first woman to win the White House,” he said. “But she did not evince much joy at the prospect of running. I may have misread her entirely that morning, but she seemed to me like a person propelled by forces not entirely of her own making.”

When asked to elaborate on the passage, Biden said that Clinton was “sort of a prisoner of history.”

“First woman who had a better-than-even chance of getting the nomination,” he said. “First woman, relative to the Republican field, who had a better-than-even chance of being president. But there’s a lot of baggage, fair and unfair, and there was no illusion on her part—this wasn’t going to be a Marquess of Queensberry fight. And so I never got the sense that there was any joy in her campaign. Maybe it’s me, but I find joy in doing this.”

Biden also said that Barack Obama did not find the same joy he did in speaking with smaller groups of people. “Barack would rather speak to a million people than speak to 30,” he said. “But I think I can do both. I really, really enjoy what I do.

The former vice president said that if his late son Beau Biden had not fallen ill there was “no question,” he would’ve run in 2016.

“I had planned on running, and I wasn’t running against Hillary or Bernie or anybody else. Honest to God, I thought that I was the best suited for the moment to be president,” he said.

Vanity Fair then noted that Biden “will turn 75 on November 20, and will turn 78 shortly after the next presidential election, which would make him, were he to be the candidate and victor, the oldest first-term president ever—older than Ronald Reagan when he left office after two terms.”

However they add that “he didn’t look 74, but, rather, that he is one of those fit older people who have redefined what 74 can look like," musing that "it probably helps that he is a teetotaler, a choice he made as a young man, having been disturbed by the effect that alcohol had on members of his family.”

Biden and President Trump have this in common. Trump doesn’t drink due to the death of his brother from alcoholism.

Biden didn’t rule a 2020 run out, telling Vanity Fair, “I haven’t decided to run, but I’ve decided I’m not going to decide not to run. We’ll see what happens.”