Report: At Least 128 Killed in ISIS Reprisals in Christian Town in Syria 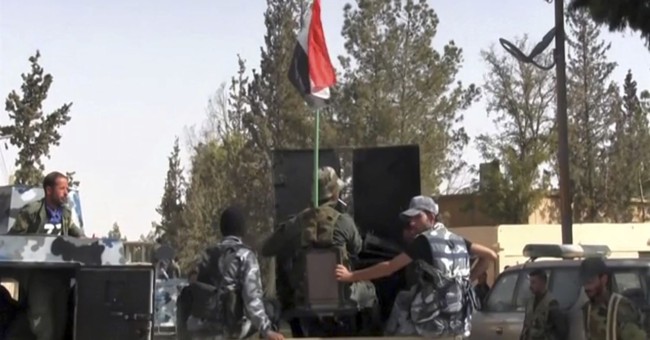 The U.K. based Syrian Observatory for Human Rights (SOHR) reported Sunday that ISIS mass executed at least 128 civilians as part of reprisals in the Syrian Christian town of Qaryatain which was under ISIS control for three weeks before being retaken by the Syrian army on Saturday.

"After the regime retook it [on Saturday], the town's residents found the bodies on the streets," SOHR’s director, Rami Abdul Rahman, told AFP.

"They had been shot dead or executed with knives,” he added. “Most of the IS fighters who attacked the town a month ago were sleeper cells. They are from the town, know the town's residents and who is for or against the regime."

ISIS previously had control of the town in August 2015 but was forced out in April 2016. During that time, they destroyed the Christian monastery of Mar Elian and took hundreds of Christians captive.

An Associated Press video (warning: video has graphic content) which was taken just after Bashar al-Assad’s forces retook the town showed bodies in the streets. A resident of the town told AP that ISIS “monsters” killed more than a 100 people, including soldiers and civilians.

“These are people who don’t know God, they don’t know anything. They killed children and women with knives, they beat women, broke their arms,” he said.

Talal Barazi, the governor of Homs province, told AP Monday that the bodies were townspeople who were mostly government employees or were affiliated with Syria's ruling Baath party.

He called the incident a “shocking massacre” saying the killings went on for the three weeks while ISIS had control of the town.