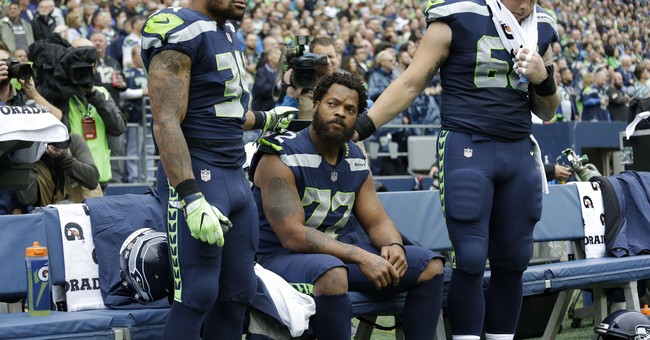 Seattle Seahawks defensive lineman Michael Bennett commented Wednesday on Dallas Cowboys owner Jerry Jones’ decision to bench players who refuse to stand for the national anthem. Bennett called the decision "crazy" and "inconsiderate of a person being a human being," even comparing it to the Supreme Court’s infamous 1857 Dred Scott decision which affirmed that slaves were the property of their owners.

"It reminded me of the Dred Scott case,” Bennett said. “You're property, so you don't have the ability to be a person first. I think that in this generation, I think that sends the wrong message to young kids and young people all across the world that your employer doesn't see you as a human being, they see you as a piece of property, and if that's the case then I don't get it. I just don't get why you don't see us as human beings first."

Bennett also emphasized that before the players and the league address protest issues going forward he believed Colin Kaepernick should be playing in the NFL again.

"I think the first step to even being able to even have a conversation is making sure that Colin Kaepernick gets an opportunity to play in the NFL," Bennett said. "I think before we even negotiate anything about whether we sit, whether we stand (during the national anthem), it should be a negotiation about opening up the doors for Colin Kaepernick and giving him an opportunity again because I feel like through everything, that's been lost.”

“All of us are having an opportunity to be able to speak to our employers,” he said, “but to think about the guy who started everything not to be able to have a voice at this moment, it just doesn't seem very right to me."

NFL commissioner Roger Goodell has stated that the players should stand for the national anthem. However, Bennett says he will resume sitting for the anthem going forward.

Former 49ers quarterback Colin Kaepernick knelt during the anthem last year as a protest of police brutality. The issue resurfaced after President Trump tweeted that the NFL should fire players who protest in this way. Trump tweeted again Wednesday that players should stand for the anthem.