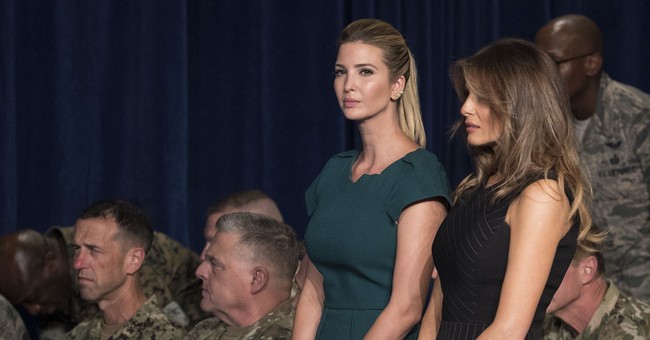 Ivanka Trump weighed in recently on all the criticism she’s been getting from critics on the left over not speaking out more or influencing her father’s decisions in areas where they may disagree.

“Some people have created unrealistic expectations of what they expect from me,” the First Daughter told the Financial Times in an interview published Thursday. “That my presence in and of itself would carry so much weight with my father that he would abandon his core values and the agenda that the American people voted for when they elected him. It’s not going to happen.”

“To those critics, shy of turning my father into a liberal, I’d be a failure to them,” she emphasized.

“Whether my contribution ultimately lives up to the expectations of some of the harshest critics? Only time will tell,” she said. “But I will not be distracted by the noise.”

She also explained why she doesn’t speak out publicly against certain decisions of her father’s despite constant pressure from liberal groups to do so.

Ivanka has been called “complicit” with her father’s agenda by many in the media and was even mocked in a Saturday Night Live parody perfume ad over the title.

‘‘If being complicit is wanting to be a force for good and to make a positive impact, then I’m complicit,’’ Ivanka told CBS’s Gayle King in April.

Failed Democratic presidential candidate Hillary Clinton even joined in on the criticism when asked Tuesday if Ivanka should be “judged and held accountable” for the actions of her father.

“Everyone associated with him,” Clinton replied, “they’re either on board with that, or they’re not. And if they’re not, they need to be speaking out or leaving. But if they remain silent and just give lip service to contrary points of views, then they are part of his agenda and should be judged and held accountable for that.”