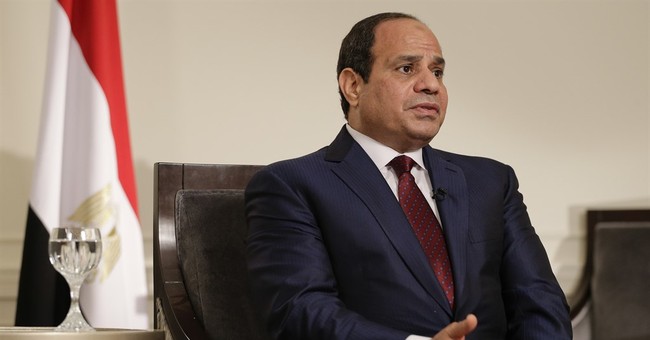 Egypt's President Abdel Fattah el-Sisi met with a delegation from the U.S. National Council of Churches in Cairo Sunday and, according to a statement from the Egyptian Embassy, “committed to upholding the principles of citizenship and equality among its citizens without discrimination on grounds of religion.”

He also said that Egypt is committed to “promoting the culture of pluralism and acceptance of the other, given the Egyptian people's civilizational legacy which enabled them to present a model for peaceful coexistence throughout history.”

President el-Sisi “underscored the tolerant values preached by Islam and confirmed that extremist practices and interpretations do not express the true essence of Islam and its noble principles which promote tolerance, peace and freedom of belief.”

The Council of Churches, an ecumenical partnership of 38 Christian faith groups in the United States, reportedly commended Egypt's “efforts to renew the religious discourse and promote understanding and peace among various religions.”

However, some skepticism of el-Sisi’s assurances that his regime is focused on religious freedom is understandable; the State Department raised many concerns over the targeting of minority faiths in Egypt in its 2016 Religious Freedom Report.

“The constitution specifies Islam as the state religion and the principles of sharia as the primary source of legislation,” the report says. “The government continued not to recognize several religious groups, including the Jehovah’s Witnesses, The Church of Jesus Christ of Latter-day Saints (Mormons), and the Bahai Faith, and restricted their activities.”

“In spite of numerous speeches by President Sisi underscoring that all Egyptians were equal citizens under the law,” the State Department notes, “numerous religious freedom and human rights activists said that government officials, courts, and prosecutors sometimes did not extend procedural safeguards and rights of due process to members of minority faiths.”

They add that religious minorities face significant threats of terrorist attacks in Egypt, citing a December suicide bomb attack by ISIS in the Coptic Orthodox Cathedral complex in Cairo that killed 29 people during Sunday services.

There have been many recent terrorist attacks on Egypt’s Christians as well, including a May attack on a bus of Christians traveling to a Monastery that left 28 Coptic Christians dead and dozens wounded and the horrific Palm Sunday bombing of the Mar Girgis church that left 44 dead.

In the meeting Sunday, el-Sisi emphasized “the need to support efforts to restore stability in the region and reinforce national institutions so as to fill the vacuum that allows terrorism to grow. He also asserted the importance of countering states and parties which support and fund terrorism.”