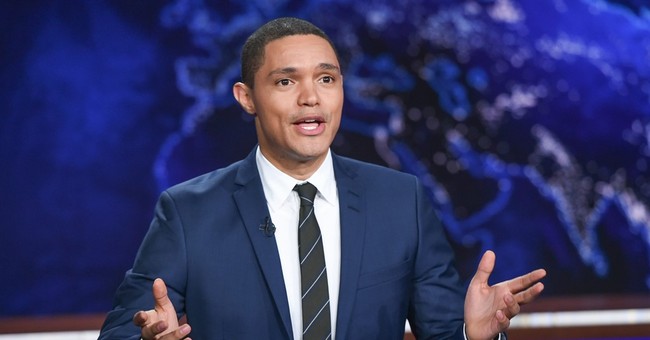 “You see, now, here’s the real problem: It doesn’t matter what your noble goal may be, it doesn’t matter what you say you’re fighting for,” Noah said. “When people see that, all they think is, ‘Oh shit, it’s Vegan ISIS.' Because you don’t realize when you think you’re punching Nazis, you don’t realize that you’re also punching your cause. Because your opponents, they’ll just use every violent incident to discredit your entire movement, and they make it seem like—they make it seem like—in a world where white supremacists have a friend in the White House, the real problem is you guys.”

He also mocked a clip of an Antifa member saying breaking a Starbucks window was a “symbolic act.”

“Seriously, though, breaking a window was a ‘symbolic act’?” he said. “You might think it’s some deep statement, but most people see that and think, ‘Great, now I’ve got to walk a whole block up to the next Starbucks, like, who is that supposed to convince? What are you trying to do? It definitely doesn’t convince the Starbucks guy, the person who’s gonna be in the store cleaning up the glass, like, ‘Yeah, they made a good point about fascism. I understand what they mean. I understand it.’”

Noah’s condemnation of the group follows condemnations by House Minority Leader Nancy Pelosi and reports that the Department of Homeland Security has classified Antifa’s activities as “domestic terrorist violence.”

Many on Twitter were also upset with Noah’s opposition to Antifa.

Three weeks ago, we said Donald Trump was dogwhisling Nazis for doing what Trevor Noah did last night.

Sometimes when you attempt to be "non-partisan," you say dumb things like thishttps://t.co/w0J3DW2zJU