Majority of Australians in Favor of Banning the Burqa 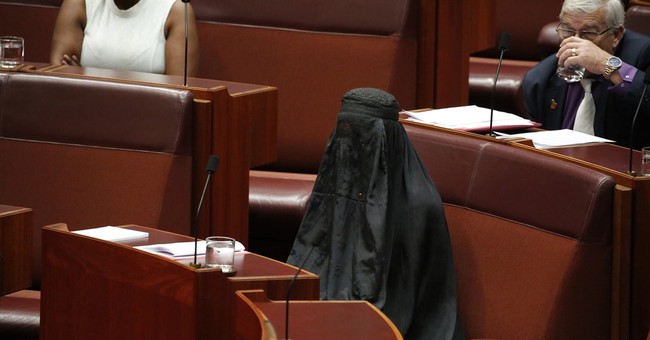 Over half of Australians are in favor of banning the burqa according to a recent Sky News poll.

The poll revealed that 43.6 percent of Australians “strongly support” a ban on burqas and 12.7 percent “approve” of it.

Just 12.3 percent and 18.9 percent of those surveyed disapproved or strongly disapproved of banning the burqa, and 12.5 percent were undecided.

A burqa ban became a subject of intense debate in Australia after a leader of Australia’s One Nation party, Pauline Hanson, wore one in the Senate in an effort to gain publicity for her motion to ban the garment.

'In light of our national security of this nation, will you work with me to actually ban the burqa in Australia considering there have been 13 foiled national threats against us with terrorism, three that have been successful that Australians have lost their lives,' she told the Senate last Thursday.

'Terrorism is a true threat to our country,” she emphasized. “Many Australians are in fear of it.'

Senator Hanson said in a statement that she wore the burqa because she thought that banning full-face coverings in public “was an important issue facing modern Australia that needed to be discussed.” Such coverings, she said, were “oppressive, presented barriers to assimilation, disadvantaged women from finding employment” and “had no place in modern Western society.”

Hanson received a lot of pushback from her colleagues, including Senator Hanson-Young who called the stunt an “absolute disgrace.”

She cited security experts who said the stunt will now be used as “fodder for promoting extremism”, telling the One Nation leader that she was “doing ISIS’s work for them”.

Australian Defence Industry Minister Christopher Pyne criticized Hanson for trying to “turn the Senate into a circus” but also said he had concerns that the burqa isolates women from society.

“That (isolating women) is a dangerous thing. It’s got nothing to do with it being Muslim or any other kind of religion for that matter,” he said. “Pauline Hanson and One Nation wanted to make it about Muslim women, but I think it’s more about isolating any kind of woman from society.”