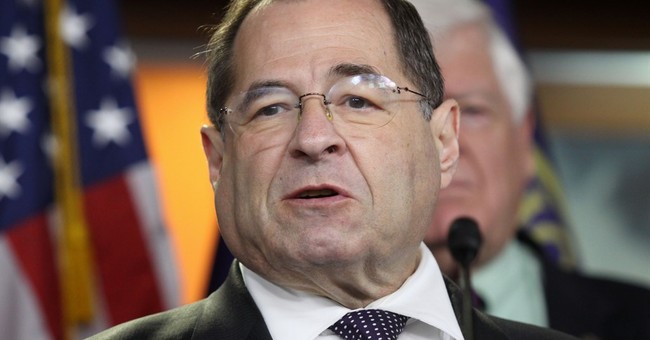 Three House Democrats plan to introduce a resolution Friday censuring President Trump for his “inadequate response to the violence in Charlottesville,” and “his failure to immediately and specifically name and condemn the white supremacist groups responsible for actions of domestic terrorism.” It also censures Trump “for re-asserting that ‘both sides’ were to blame and excusing the violent behavior of participants in the ‘Unite the Right’ rally, and for employing people with ties to white supremacist movements in the White House, such as Steve Bannon and Sebastian Gorka.”

The resolution, backed by Reps Jerrold Nadler (D-NY), Bonnie Watson Coleman (D-NJ), and Pramila Jayapal (D-WA), asks the president “to fire any and all White House advisors who have urged him to cater to the alt-Right movement in the United States.”

The resolution says that “President Donald Trump held a press conference at Trump Tower where he re-asserted that ‘both sides’ were to blame for the violence in Charlottesville, Virginia, and attempted to create a moral equivalency between white supremacist, KKK, neo-Nazi groups and those counter-protesting the ‘Unite the Right’ rally.”

President Trump denied that he attempted to create a “moral equivalency” between the groups both in his remarks Tuesday and in a tweet to Sen. Lindsey Graham Thursday.

Publicity seeking Lindsey Graham falsely stated that I said there is moral equivalency between the KKK, neo-Nazis & white supremacists......

He was asked Tuesday if he was putting “the alt-left and white supremacists on the same moral plane.”

He defended the lateness of his specific condemnation of the white supremacist groups emphasizing, “When I make a statement, I like to be correct. I want the facts. This event just happened. In fact, a lot of the event didn't even happen yet, as we were speaking.”

He also defended his chief White House strategist at the press conference saying, “I like Mr. Bannon, he's a friend of mine, but Mr. Bannon came on very late — you know that. I went through 17 senators, governors and I won all the primaries. Mr. Bannon came on very much later than that, and I like him, he's a good man. He is not a racist, I can tell you that. He's a good person, he actually gets a very unfair press in that regard."

Trump also told the press that he had not spoken to Bannon about the Charlottesville incident amidst rumors that Bannon had influenced his statement on it. In an "off the record" interview that came out Thursday, Bannon called white supremacists “a collection of clowns,” and "a fringe element,” adding, "the media plays it up too much, and we gotta help crush it."

The resolution is set to be introduced at 10 a.m. during the House’s next pro-forma session Friday and has a growing list of Democratic co-sponsors. Only one president has ever been formally censured by Congress. Andrew Jackson was censured in 1834 for withholding documents related to his defunding of the Bank of the United States.