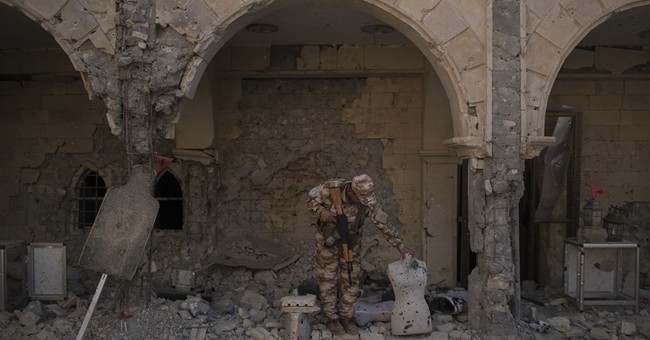 While ISIS is facing defeat in the city of Mosul, many Christians returning home are faced with devastation and destruction. The Dominican Sisters in Erbil, Iraq recently wrote an open letter describing what they found when they returned to their convent in the Plains of Nineveh in November and how the Christian communities there are trying to rebuild.

“When we first visited our Christian towns, we were so much stunned by the damage we saw,” they write, calling it “painful to see all that overwhelming destruction.” Their letter includes heartbreaking footage of the damage they found upon their return.

“Walking sluggishly in our Christian towns we wondered remembering the word of God to prophet Ezekiel, ‘Son of man, can these bones live?’ and we found ourselves answering him ‘Sovereign LORD, you alone know,’ (Ezekiel 37:3),” they write. “Inspired by the stories and experiences of Biblical characters, we believe that God is able to raise us again in a new way.”

They detailed some signs of hope they have seen since their return.

“There are over 600 families today in Telskuf and 450 in Qaraqush,” they note. “Telskuf was much less destroyed than Qaraqush. Although in Qaraqush the amount of destruction is estimated to be 30%, rebuilding is not easy and the NGOs that have afforded to help with rebuilding are not enough compared to the destruction.”

“There are 7000 home[s] in Qaraqush and 2400 of them are completely burned and another 4400 are partly burned and destroyed,” they say, “there are 116 house[s] completely destroyed. The hope is to repair as many houses as possible before the beginning of the school year in September, but of course there is a problem with the funding. So far only the church and some NGOs are doing the rebuilding.”

The Knights of Columbus are among groups raising funds to help Christians return to their homes and rebuild their communities in the wake of ISIS. They are trying to raise $2 million to rebuild the town of Karamdes in the Nineveh Plains.

The sisters plan to return to Qaraqush although their convent there is partially destroyed. Their orphanage was also destroyed but they have found lodging until they are able to rebuild.

Three years ago as ISIS approached, the nuns were forced to flee in the dead of night although they tried to stay and continue their ministry in Qaraqush for as long as possible. The sisters spent their time in exile ministering to other refugees.

“The amount of destruction is overwhelming in every field,” they write. “It will take years to be fixed, but there is nothing impossible with God. Of course, it is not easy to decide whether to go back to Mosul or not. Some people still try to understand what the will of God is -if ISIS is defeated that does not mean that the Plain of Nineveh is entirely cleansed from that mentality. However, we as community decided to return with our people; and pray and hope all people will have the courage to go back to their hometowns and be able to start from the beginning again.”