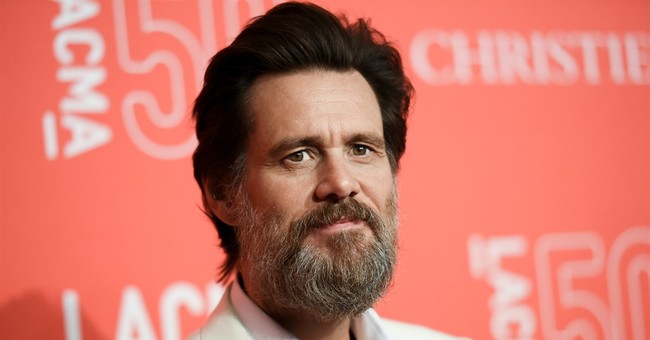 Actor and comedian Jim Carrey mocked President Trump’s rally in West Virginia Thursday in an odd tweet that depicted Trump with fangs and a bloody mouth.

“Tonight in West Virginia @realDonaldTrump is expected to EAT A BABY on stage to the delight of his zombie base. #walkingdead,” Carrey tweeted.

Tonight in West Virginia @realDonaldTrump is expected to EAT A BABY on stage to the delight of his zombie base. #walkingdead pic.twitter.com/yM39Y9fHN2

In June, Carrey defended comedian Kathy Griffin’s photoshoot in which she held up a depiction of Trump’s severed, bloody head. Griffin later apologized for the photos but then held a press conference about how she had been bullied by the Trump administration.

Griffin lost her position co-hosting CNN’s New Year’s Eve program over that stunt, but Carrey told Entertainment Tonight that "It's the job of the comedian to cross the line at all times."

"That line is not real and if you step out into that spotlight and you're doing the crazy things that (Trump) is doing, we're the last line of defense. The comedians are the last voice of truth in this whole thing," he claimed.

He then made a comment that certainly crossed some lines.

"I had a dream the other night that I was playing golf with Donald Trump," Carrey said. "I was standing beside him with a club in my hand and I was considering my options when I suddenly woke up. It was one of those dreams where you want to go back to sleep so you can finish it, you know? But I've taken up golf anyway."