Graham On Reassurance He Needs for 'Skinny' Repeal Bill: ‘It’s Like Pornography, You’ll Know It When You See It' 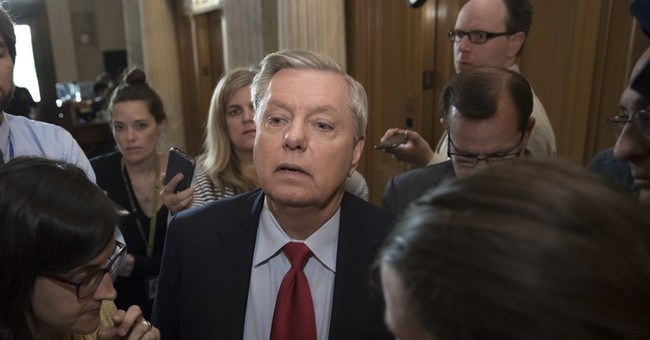 Senator Lindsey Graham (R-SC) along with Senators John McCain (R-AZ) and Ron Johnson (R-WI) appeared in a press conference Thursday to raise concerns about the GOP’s “skinny” Obamacare repeal bill which he called a “half-assed approach.” He said he would only vote for the bill if he receives assurances from the House that a better bill will be hashed out in conference.

Graham said he received a phone call from Rep. Mark Meadows (R-NC) telling him that there was a move in the House to pass the “skinny” repeal and send it to the president’s desk rather than go to conference.

So what kind of assurance does Sen. Graham need from the House that the bill the Senate passes will go to conference? He described it to reporters with his usual flair.

“We don’t have it, it’s like pornography you’ll know it when you see it,” he said.

Graham said if the House passes the “skinny” repeal it would "politically" be the "dumbest thing in history."

Sen. Johnson said the plan had been presented to senators only as "a vehicle to get to conference."

Sen. McCain also emphasized that he is "voting no unless I see that there is a path to a conference."

When asked about the pushback he might receive, Graham replied, "I do this with joy in my heart."

"I'm not going to vote for a figment of hope and I'm not going to tell people back in South Carolina this replaces Obamacare,” he said, adding, “I'm not the bad guy here."

A bill goes to conference when the Senate and House pass different versions of legislation and try to reach a compromise that they then both vote to approve. The House has already passed the American Health Care Act as an alternative to Obamacare.