Sen. Grassley: On Many Campuses Free Speech Is Sacrificed at the Altar of Political Correctness 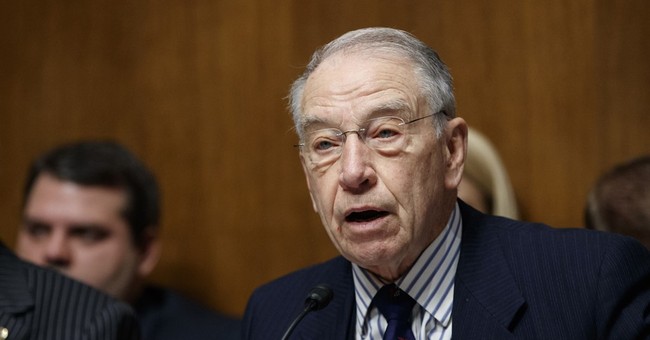 Sen. Chuck Grassley (R-IA) presided over a Senate Judiciary Committee hearing Tuesday on “The Assault on the First Amendment on College Campuses.” In his opening remarks, Grassley cited several recent concerning incidents on college campuses and expressed concern that “on too many campuses today, free speech appears to be sacrificed at the altar of political correctness.”

Grassley cited a requirement At Kellogg Community College for “prior approval for speech in public forums, a two-fold violation of the First Amendment,” adding that “amazingly, students there were arrested for distributing copies of the United States Constitution. Their lawsuit against the college and against its administrators in their personal capacity is pending.”

He said that “many students erroneously think that speech that they consider hateful is violent, but “some students engage in acts of violence against speech, and universities have failed to prevent or adequately punish that violence.”

He cited the instances of safety concerns over mob violence at the University of California Berkeley which the university “failed to control” that prevented invited speakers Milo Yiannopoulos and Ann Coulter from speaking.

Grassley emphasized that “the First Amendment is clear. The Supreme Court has decided that offensive speech is protected, that speech cannot be restricted based on viewpoint, that public forums must be places where free speech rights can be exercised, and that prior restraints on speech are highly disfavored. Otherwise, any speech that anyone found offensive could be suppressed. Little free speech would survive.”

This point was reaffirmed Monday when the Supreme Court ruled in favor of an Asian-American bad named “The Slants” being able to trademark the term because of free speech despite the U.S. Patent and Trademark Office finding it to be offensive.

“Many administrators believe that students should be shielded from hate speech, whatever that is, as an exception to the First Amendment,” Grassley said. “Unfortunately, this censorship is no different from any other examples in history, when speech that authorities deemed to be heretical has been suppressed based on its content.”

Grassley also cited a recent Gallup poll which found that “students by a 69-31 margin believe that it is desirable to restrict the use of slurs and other language intentionally offensive to certain groups.”

“Our democracy depends on the ability to try to advocate to inform or to change minds,” he emphasized. “When universities suppress speech, they not only damage freedom today, they establish and push norms harmful to democracy going forward. These restrictions may cause and exacerbate the political polarization that is so widely lamented in our society.”

Sen. Dianne Feinstein (D-CA), thought that for speeches that inspire violent protest “maybe universities should be steeped in and have the ability financially to really develop the kind of intelligence you need and the kind of policing that you need at some of these events.”

“I think our efforts would be much better finding methodologies to handle those incidents,” she explained, pointing out that many universities are dealing with real safety concerns that they do not have the resources to address.

“It’s not a simple matter when demonstrations become violent,” she emphasized.

Sen. Ted Cruz (R-TX) pointed out that on many campuses “You see violent protests … enacting effectively a heckler’s veto where violent thugs come in and say ‘this particular speaker, I disagree with what he or she has to say. And therefore, I will threaten physical violence if the speech is allowed to happen.”

Cruz added that “far too many colleges and universities quietly roll over and say ‘okay the threat of violence we will effectively reward the violent criminals and muzzle the First Amendment.’”