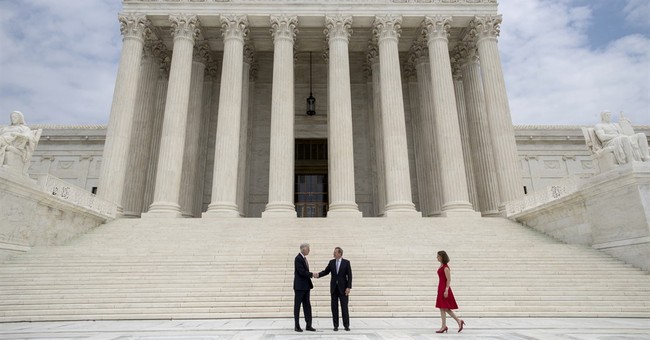 The Supreme Court affirmed Monday that terms or phrases deemed to be offensive are still protected as free speech under the First Amendment. The high court unanimously struck down a disparagement provision of federal trademark law in Matal v. Tam, a case in which the U.S. Patent and Trademark Office (PTO) denied an Asian-American rock band a trademark for their name “The Slants” because they found the name to be offensive.

Simon Tam, the band’s lead singer, says he chose the name to reclaim the “slants” slur and “drain its denigrating force as a derogatory term for Asian persons.”

The PTO denied the application under the Lanham Act provision which prohibits the registration of trademarks that may “disparage . . . or bring . . . into contemp[t] or disrepute” any “persons, living or dead.”

“We now hold that this provision violates the Free Speech Clause of the First Amendment,” Justice Samuel Alito wrote of the provision in his plurality opinion. “It offends a bedrock First Amendment principle: Speech may not be banned on the ground that it expresses ideas that offend.”

“The disparagement clause denies registration to any mark that is offensive to a substantial percentage of the members of any group,” Alito writes. “That is viewpoint discrimination in the sense relevant here: Giving offense is a viewpoint.”

“Speech that demeans on the basis of race, ethnicity, gender, religion, age, disability, or any other similar ground is hateful,” Alito adds, “but the proudest boast of our free speech jurisprudence is that we protect the freedom to express ‘the thought that we hate.’”

Justice Alito was joined in part in his opinion by all the justices with the exception of Justice Neil Gorsuch who took no part in the consideration or decision of the case.

Justice Anthony Kennedy pointed out, in a separate opinion concurring in part with Alito, that “a law that can be directed against speech found offensive to some portion of the public can be turned against minority and dissenting views to the detriment of all.”

“The First Amendment does not entrust that power to the government’s benevolence,” Kennedy writes. “Instead, our reliance must be on the substantial safeguards of free and open discussion in a democratic society.”

“After an excruciating legal battle that has spanned nearly eight years, we’re beyond humbled and thrilled to have won this case at the Supreme Court. This journey has always been much bigger than our band: it’s been about the rights of all marginalized communities to determine what’s best for ourselves. During the fight, we found the Trademark Office justifying the denial of rights to people based on their race, religion, sexual orientation, and political views, simply because they disagreed with the message of these groups. To that end, they knowingly used false and misleading information, supported by questionable sources such as UrbanDictionary.com, while placing undue burdens on vulnerable communities and small business owners by forcing them into a lengthy, expensive, and biased appeals process. The Supreme Court has vindicated First Amendment rights not only for our The Slants, but all Americans who are fighting against paternal government policies that ultimately lead to viewpoint discrimination.”

Another group celebrating the free speech win is the Washington Redskins whose name was also deemed an ethnic slur by the PTO. The team challenged the PTO’s decision to strip them of their trademarks in Pro Football, Inc. v. Blackhorse.

The team celebrated the decision in a statement and Redskins owner Dan Snyder was thrilled.

Statement from #Redskins Owner Dan Snyder on Supreme Court ruling: "I am THRILLED! Hail to the Redskins."