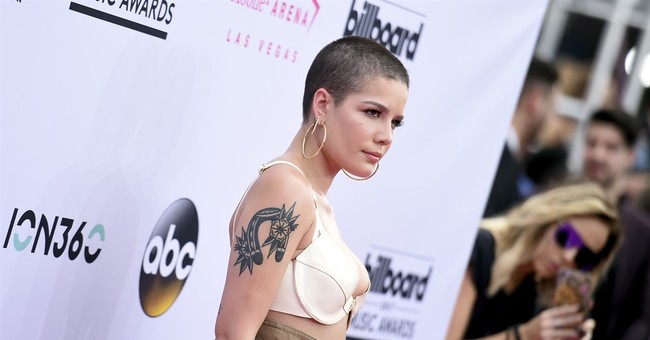 Grammy-nominated singer Halsey, in a video praised by Teen Vogue, claimed that “women die” as a result of President Trump re-instating and expanding the Reagan-era ban on funding for abortion overseas, dubbed the “Global Gag Rule” by opponents.

The policy, which the Trump administration called “Protecting Life in Global Health Assistance,” ensures that “U.S. taxpayer money should not be used to support foreign organizations that perform or actively promote abortion as a method of family planning in other nations.”

“Donald Trump sat down at his desk in the White House surrounded by a group of white men and announced his global gag rule,” Halsey says in the video, “a ban on funding for any international organization that anywhere in its healthcare programs provides or even discusses abortions with patients other than in cases of rape, incest, or life endangerment.”

“Trump took a failed, deadly policy first introduced by the Reagan administration and rescinded by every Democratic president since and made it worse,” she claims. “The gag rule shuts down funding for services like HIV prevention or contraception if providers so much as advise a patient on where to get an abortion.”

The expanded policy applies to approximately $8.8 billion in funds to the State Department, the U.S. Agency for International Development, and the Department of Defense.

State Department officials explained to reporters in May that the change “will have no impact on the total amount of U.S. Government funding for health programs around the world. Departments and agencies will reprogram to other organizations any funding they would have awarded to NGOs that do not agree to the terms of Protecting Life in Global Health Assistance.”

“It’s part of an overall pattern and plan to deny women in the US and abroad their right to choose what happens to their own bodies,” Halsey concludes of the policy. “None of us are free until all of us are free.”

Hauwa Shekarau, director of IPAS for Nigeria, appears in Halsey’s video as well and says that “unsafe abortion is a major contributor to the maternal mortality ratio in Nigeria which is about one of the highest in the world,” claiming, “the global gag rule means that more women in sub-Saharan Africa may die from unwanted pregnancies and unsafe abortion.”

Abortion is illegal in Nigeria except to save the life of the mother. In a 2013 Pew research poll, 80 percent of Nigerians believed that abortion was morally unacceptable.

Obianuju Ekeocha, a Nigerian-born biomedical scientist and president of Culture of Life Africa, said at a conference on the status of women at the United Nations last year that “most of the African native languages, don’t even have a way of phrasing having an abortion that means anything good,” emphasizing “neo-colonialism was occurring,” when “people from the Western World try to give us this kind of language that we could never translate.”

“Most of the African communities actually believe by their traditions and their cultural standards that abortion is a direct attack on human life,” Ekeocha concluded.