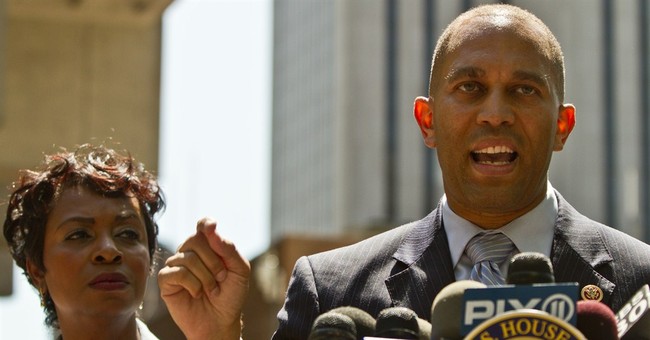 “The President of the United States is a dangerous con artist,” Jeffries claimed. “He has always been a con artist, he will always be a con artist and now he has taken his dangerous act to the White House where his actions threaten the very fabric of our democracy.”

“The President’s decision to fire James Comey, the FBI director, is undemocratic, unpatriotic, and un-American,” he continued.

He said that the claim that the President fired James Comey because of how the FBI director treated Hillary Clinton was “absurd, that is insane, that is an outright lie.”

“Donald Trump is hiding something from the American people as it relates to Russia’s interference in our election. We are determined to make sure that we as a Congress figure out what does Donald Trump know and when did he know it,” Jeffries said.

Jeffries called for an independent investigation into the administration’s ties with Russia.

“There is a cloud of illegitimacy hanging over 1600 Pennsylvania Avenue that could only be cleaned up with a fair, impartial, and independent investigation,” he said, adding that this could only be cleared up if Deputy Attorney General Rod Rosenstein appointed a special prosecutor, calling anything short of that “unacceptable.”

Jeffries speculated in October that Comey had abused his power and violated the Hatch Act over the letter he sent to Congress regarding the investigation into Hillary Clinton’s emails.

It appears the @FBI director may have abused his power and violated the #HatchAct ?
https://t.co/ePdFx97c3n

He also said in a November interview that “the democratic process has been hurt” by Comey’s action in sending that letter.

Jeffries was asked by a reporter about the Democrats prior criticisms of Comey over his handling of the investigation into Hillary Clinton’s emails during the election cycle.

“The time for the President of the United States to have terminated James Comey would have been upon his inauguration as the 45th president of the United States of America,” Jeffries responded, “once it was revealed that the Trump campaign was under criminal investigation for possible, unlawful collusion with Vladimir Putin and his Russian intelligence agents at that point in time James Comey as FBI director leading the investigation became untouchable.”