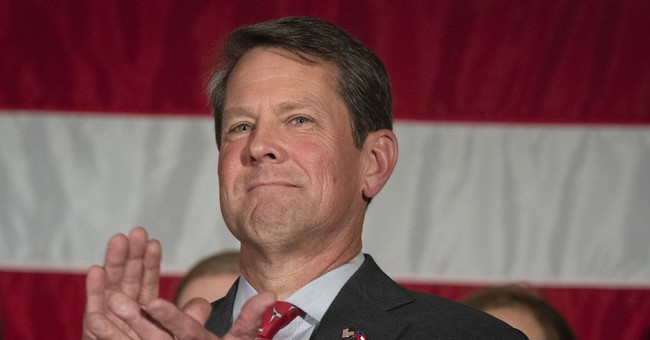 After former Sen. David Perdue announced Monday morning that he would be challenging Gov. Brian Kemp in Georgia's gubernatorial election, the two wasted no time in taking shots at each other, giving voters a preview into what could be a testy GOP primary.

In a video announcing his run to become the next governor of Georgia, Perdue slammed Kemp for failing to support former President Donald Trump's efforts to overturn the state's election results in the 2020 election. Kemp certified Georgia's 16 electoral votes for now-President Joe Biden, infuriating Trump and his allies.

"Instead of protecting our elections, he caved to [Stacey Abrams] and cost us two Senate seats, the Senate majority and gave Joe Biden free rein," Perdue said in the video. Republicans lost control of the Senate in January after Perdue lost to Jon Ossoff (D) and fellow Republican Kelly Loeffler was beaten by Raphael Warnock (D) in Georgia's runoff elections for its two Senate seats.

"Think about how different it would be today if Kemp had fought Abrams first, instead of fighting Trump. Kemp caved before the election, and the country is paying the price today," he continued.

I’m running for Governor to make sure Stacey Abrams is NEVER Governor of Georgia. We need bold conservatives who will stand up to the woke left, not cave to their radical demands. Join me in this fight to Stop Stacey and Save Georgia. pic.twitter.com/iQMMV97ynw

But Kemp's campaign responded by blaming Perdue for Republicans' failure to maintain control of the Senate, thus, giving Democrats full control of Washington and the opportunity to push their social and economic agenda.

"The man who lost Republicans the United States Senate and brought the last year of skyrocketing inflation, open borders, runaway government spending, and woke cancel culture upon the American people now wants to lose the Georgia governor’s office to the national face of the radical left movement," Kemp campaign spokesperson Cody Hall said in a statement to Townhall. "It may be difficult for David Perdue to see this over the gates of his coastal estate, but Joe Biden’s dangerous agenda is hitting hardworking Georgians in the wallet and endangering their livelihoods - and we all have David Perdue to thank for it."

"Perdue’s only reason for running is to soothe his own bruised ego, because his campaign for U.S. Senate failed to inspire voters at the ballot box - twice," he continued. "Governor Kemp has a proven track record of fighting the radical left to put hardworking Georgians first, while Perdue is best known for ducking debates, padding his stock portfolio during a pandemic, and losing winnable races."

And Stacey Abrams, who Kemp beat by less than one and a half percentage points in the 2018 election, is running again to become the next governor of Georgia. She is the only Democrat thus far to announce a run for Georgia governor.

Kemp released a statement following Abrams' announcement to enter the race, saying that her "far-left agenda" does not "reflect who we are as Georgians" and that her "never-ending campaign for power has already hurt Georgia businesses and cost our state millions," a reference to the Democrat praised the MLB's decision to move its all-star game from Atlanta after the governor signed into law legislation to protect the integrity of elections in the state.

"With Stacey Abrams in control, Georgia would have shut down, students would have been barred from their classrooms, and woke politics would be the law of the land and the lesson plan in our schools. Her far-left agenda of open borders, gun confiscation, high taxes, and anti-law enforcement policies don’t reflect who we are as Georgians," he said.

"Stacey’s never-ending campaign for power has already hurt Georgia businesses and cost our state millions – all in service to her ultimate ambition of becoming President of the United States," he continued. "Next November’s election for Governor is a battle for the soul of our state. I’m in the fight against Stacey Abrams, the failed Biden agenda, and their woke allies to keep Georgia the best place to live, work, and raise a family."

And on Monday evening, Trump endorsed Perdue, saying in a statement that the former senator "has my Complete and Total Endorsement. He will not let you down!"