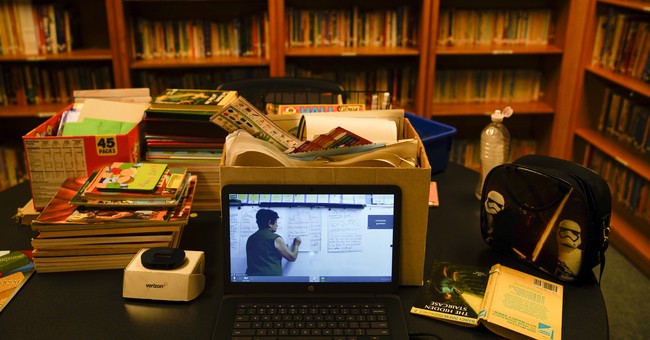 A Texas school board has attributed the spread of sexually explicit material in books shelved at one of its school libraries to parents who have protested the books on social media.

Keller Independent School District was found to have a book in one of its libraries that included illustrations and descriptions of sex, pedophilia and incest, according to an Oct. 26 Twitter thread posted by a parent in the district.

The district then informed parents that the book had been removed from the library. However, other books later discovered by parents that also contained inappropriate material remain.

Texas Gov. Greg Abbott (R) issued a letter to the Texas Association of School Boards, calling on them to "ensure that no child in Texas is exposed to pornography or other inappropriate content while inside a Texas public school."

And after the district was criticized on Facebook for offering the pornographic book to children, KISD School Board President Ruthie Keyes responded with a comment that said parents should be ashamed of themselves for spreading the content online.

"This was one of 589,000 books in the district," Keyes said in her response on Facebook. "It was immediately removed and the only reason hundreds of people saw it is because people started distributing out [sic] on social media. Those are the people that should be ashamed for distributing. I wish people would want to be part of the solution and ask what they can do to help instead of spreading hate and division."

Her remarks prompted a petition, which has about 1,500 signatures, asking for the district to hold a special board meeting.

"Sadly, in far too many districts across the country, school board members ignore and mock the concerns of the very people they have been elected to represent. It's little wonder there were electoral repercussions last week - a trend that is likely to continue unless and until voters are treated with respect," PDE President Nicole Neily said in a statement.