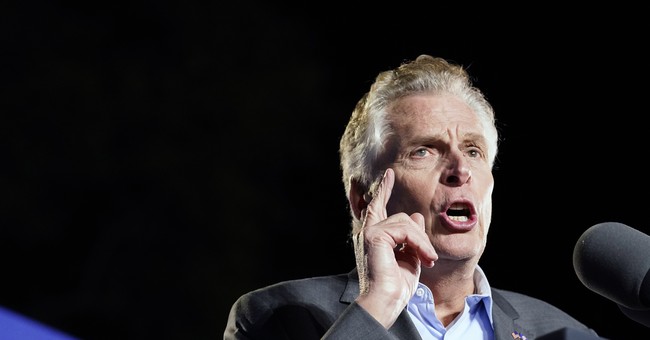 Virginia gubernatorial candidate Terry McAuliffe (D) called for the commonwealth to "diversify our teacher base" during a campaign event, noting that the vast majority of the state's teachers are white.

He also ensured that a new program would be created to incentivize racial minorities to become teachers in Virginia.

"Fifty percent of our students are students of color, 80 percent of the teachers are white, so what I’m going to do for you, we’ll be the first state in America," McAuliffe said Sunday. "If you go teach in Virginia for five years in a high-demand area — that could be geographic, it could be course work — we will pay room, board, tuition, any college, any university, or any HBCU here in Virginia."

The one-time governor's pitch to address the racial disparity in the teaching profession appeared to be an effort to push affirmative action, prioritizing the hiring of non-white educators.

McAuliffe's closing message: Va has too many white teachers

“50% of the students at Va. schools K-12, 50% are students of color & yet 80 percent of teachers are white. We all know what we have to do in a school to make everybody feel comfortable in school. So, let’s diversify" pic.twitter.com/TJC2beResW

This comes as Virginia parents have increasingly shown up to school board meetings to express their frustration with school districts implementing transgender policies, sexually explicit content, mask mandates and critical race theory.

McAuliffe has called critical race theory a "racist dog whistle," and claimed that it has never been taught in Virginia schools.

This, despite Fairfax County Schools paying Ibram X. Kendi, author of "How to be an Antiracist," $20,000 to speak to school officials about racism. Loudoun County Schools paid more than $300,000 to Parents Defending Education for training materials that begins with an "Intro to Critical Race Theory."

Parents Defending Education is an organization of parents that looks to "reclaim our schools from activists imposing harmful agendas."

And the Virginia Department of Education is promoting a book that states that "Teachers must embrace theories such as critical race theory."

McAuliffe has also said that parents should not determine what is taught in their children's schools.

The hotly contested Virginia gubernatorial election will take place Nov. 2, with Republican Glenn Youngkin tied with or leading McAuliffe in each of the latest polls.