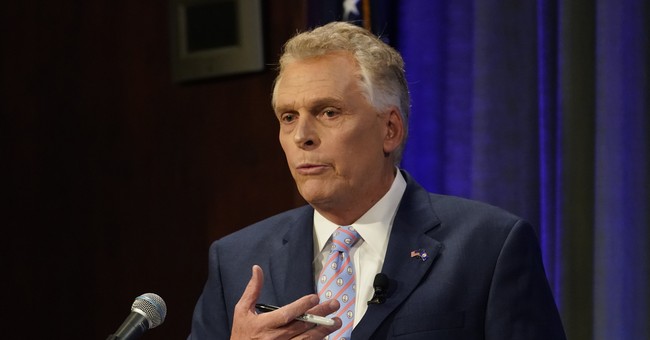 Virginia gubernatorial candidate Terry McAuliffe (D) said during a roundtable discussion that defining critical race theory is "wasting precious viewers' time" because it "is not taught here in Virginia" and that the doctrine is a "dog whistle."

"I'm not even spending my time because the school board and everyone else has come out and said it's not taught," McAuliffe said Thursday. "It's racist. It's a dog whistle."

When pressed about his definition of critical race theory, the former Virginia governor refused.

"It's not taught here in Virginia," he said. "We can ask about any topic. Here's what I've said all along, and it really bothers me — this whole idea of stirring parents up to create divisions. Our children are going through such challenges today because of COVID, and we're talking about something here today wasting precious viewers' time."

Critical race theory and other similar doctrines declare that the United States is inherently racist and that an individual is deemed to be either privileged or oppressed based on their skin color.

The ideology has been the subject of contention at school board meetings in Virginia and across the nation. Loudoun County School Board meetings in particular have garnered national attention over critical race theory and its transgender policy.

During a contentious Loudoun County School Board meeting in June, a fight broke out after audience members expressed their displeasure with comments made by a board member. One person was charged with disorderly conduct and resisting arrest, while another received a summons for allegedly trespassing, ABC7 reported.

In August, a Loudoun County school teacher announced her resignation in an emotional speech to school board members.

Glenn Youngkin, the Republican gubernatorial candidate in Virginia, said that McAuliffe is pushing a "political agenda of critical race theory into our schools."

As governor, Terry McAuliffe pushed the divisive political agenda of critical race theory into our schools.

The Department of Justice announced this week that it would direct law enforcement agencies to "address threats against school administrators, board members, teachers and staff" after a letter to the White House from the National School Boards Association claimed that parents speaking up against critical race theory and other controversial policies at school board meetings "could be the equivalent to a form of domestic terrorism and hate crimes."