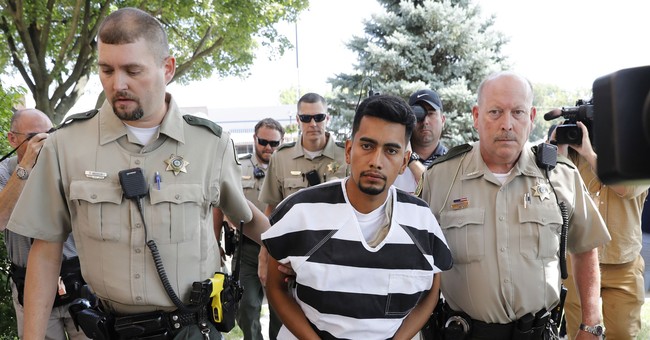 The man convicted of the 2018 killing of University of Iowa student Mollie Tibbetts was sentenced Monday to life in prison without parole.

Cristhian Bahena Rivera's sentence from Judge Joel Yates was mandatory for a first-degree murder conviction in Iowa, which does not carry the death penalty, according to The Associated Press. The 27-year-old illegal immigrant has been in jail since his August 2018 arrest.

Yates rejected claims from the defense that alleged a couple masked men kidnapped Bahena Rivera and forced him at gunpoint to dispose of Tibbetts' body after they had killed her.

"You, and you alone, forever changed the lives of those who loved Mollie Tibbetts. And for that, you and you alone will receive the following sentence," Yates said.

Tibbetts, 20, had disappeared on July 18, 2018 while going for a run just outside of her hometown of Brooklyn, Iowa. Investigators were led to Bahena Rivera after a nearby homeowner's surveillance footage showed his vehicle repeatedly driving past Tibbetts during her run.

Bahena Rivera, a former farmhand, later led investigators to Tibbetts' body after a lengthy interrogation. The body was found in a cornfield a month after her disappearance. An autopsy found she had been stabbed several times.

Tibbetts' mother addressed Bahena Rivera in a victim impact statement that was to read to the court by a representative.

"Mollie was a young woman who simply wanted to go for a quiet run on the evening of July 18 and you chose to violently and sadistically end that life," she wrote.

The case became a national political issue following the arrest, due to Bahena Rivera status as an undocumented immigrant, after then-President Donald Trump argued that Tibbetts' death was a result of weak immigration laws.

Tibbetts' family then pushed back against politicians for making the tragedy a political issue.

"Sadly, others have ignored our request. They have instead chosen to callously distort and corrupt Mollie’s tragic death to advance a cause she vehemently opposed," her father wrote in the Des Moines Register at the time.