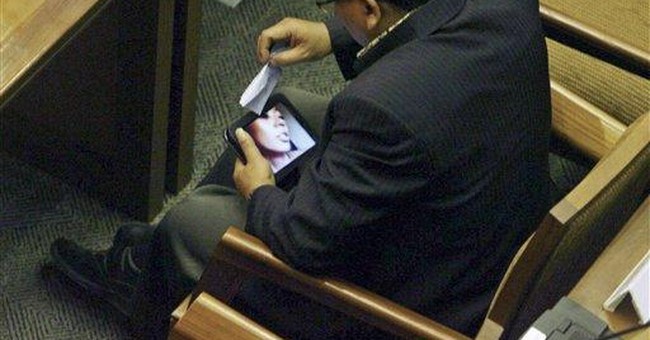 As the Washington Times reports:

Investigations at the Department of Housing and Urban Development, the Commerce Department and the General Services Administration have turned up similar cases, though memos show the employees rarely face criminal prosecution for time and attendance fraud.

It's absolutely shameful, but even if it's not pornography, it's inevitable that bored government workers whose time isn't occupied will turn to something that's going to be a waste of taxpayer resources.

The fact that our bureaucrats spend their days working as amateur snake charmers is, counterintuitive though it may sound, the good news. Rather than fire these tireless onanists, the federal government should upgrade their broadband and invest in . . . whatever matériel these ladies and gentlemen need to keep up their fearless campaign of hand-to-gland combat. If their brains ever get full use of the blood supply while they’re in the office, mischief surely will ensue.

True, there's upside here: workers who are "occupied" with these "activities" aren't actively harming Americans by meddling in their lives.