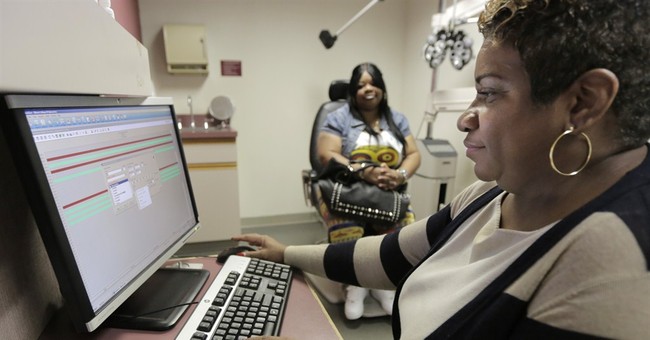 Touted early as Obamacare success stories, it's turning out that the state health exchanges rival Healthcare.gov for dysfunction. Some states have still signed up only a few dozen people. Now the officials that run Vermont's state exchange, which was also held up encouragingly due to its high rate of Obamacare sign-ups, are realizing that their infrastructure isn't up to code either.

Vermont officials are mandating that state employees work 56-hour workweeks through the end of the year in order to make sure everything is functional.

“It’s our understanding through the employees that they were just last week mandated 56-hour weeks,” said Doug Gibson, a spokesman for the Vermont State Employees Association, a union representing state employees.

Gibson said multiple employees approached VSEA with concerns that they are being made to work 56-hour weeks on tasks they haven’t been adequately trained for.

According to Gibson and state Human Resources Commissioner Kate Duffy, the employees have been asked to enter data from the paper enrollment forms the state used when the health care exchange website wasn’t working properly.

Duffy told VPR that "we wouldn't do this unless we absolutely had to. But we do."

Over at Bloomberg, Megan McArdle was sounding the alarm on Vermont last week when the HHS report found that Vermont was leading the pack on people "determined eligible" for its state exchange:

Vermont is supposed to sign up 20 percent of its population through the exchanges, 12 percent of whom must have had some other form of insurance. And unlike in other states, the law offered no way for those people to buy insurance outside of the exchanges.

That means that in theory, almost 10 percent of the population of Vermont needs to sign up for insurance in the first three weeks of December, just to avoid losing coverage. Fortunately, Vermont is a small state, so that’s a small number -- fewer than 60,000 people. The bad news is that Vermont’s exchanges haven’t been working too well. The governor has belatedly unveiled contingency plans: Individuals can extend their 2013 coverage for three months, and small businesses can sign up directly with a carrier. So hopefully, most people won’t actually lose coverage. Nonetheless, for the state of Vermont, 2.5 percent of its population signed up represents a disastrous failure, not a roaring success.

Guess who's been responsible for Vermont's health website? That's right - CGI Group, the same contractor behind the disastrous failure of Healthcare.gov. VPR reports that the federal government gave Vermont $172 million to build its health website, and that CGI received an $84 million contract from Vermont to make sure the site is built and functional.