2013 Elections: How Much Money Really Matters 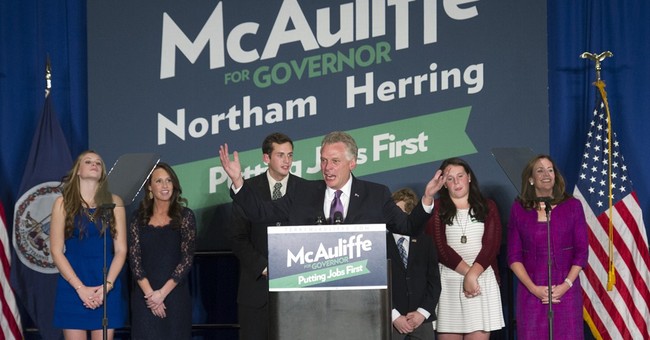 Ken Cuccinelli lost a winnable race in Virginia for the governorship this month against Terry McAuliffe, a national-profile Democrat whose primary political skill was fundraising. Cuccinelli was massively outspent over the last few weeks of the race.

Some have speculated that it was McAuliffe's massive fundraising advantage that won it for the Democrat.

Sean Trende, elections analyst for RealClearPolitics, wrote about some of the latest data when it comes to fundraising and electoral victory:

The relationship between the winner’s margin and his spending advantage over the loser is stronger than it was with incumbents (p=.37), but it is still statistically insignificant. The relationship between the losing party’s fundraising and the winning party’s margin is statistically significant, and is also logarithmic. We can explain 80 percent of the variation in the winning party’s vote share in open seats just by looking at the district’s Cook PVI and the amount of money her opponent raises.

[T]his should cast some serious doubt on the notion that Cuccinelli lost because the RNC spent substantially less on his race than it spent on Bob McDonnell’s run in 2009. Republicans spent well over $10 million on that race. Yes, Cuccinelli was outspent by Terry McAuliffe and liberal-leaning groups, but he was past the point where additional money would make a difference. People knew his name, had seen his ads, had heard him on the radio and had seen him at campaign rallies. That’s not to say that an extra $5 million would have made zero difference in the outcome, but I’m skeptical it would have closed the 2.5 percent gap that he lost by.

We analysts spend an awful lot of time talking about fundraising, but the truth is that candidates who raise a few hundred thousand dollars have what it takes to mount credible congressional campaigns, and the difference between a $2 million campaign and a $3 million campaign isn’t that great.

The conclusion to take away from the data when it comes to money and politics is that money matters - but unless there's an obscene imbalance, it's not the sole determinant of an election's winners and losers. Ken Cuccinelli's fundraising and spending plan was enough to win independently of how the rest of the campaign went.

Steve Levitt, an economist at the University of Chicago and author of Freakonomics, has studied the same subject, with similar results:

What is true is that the candidates with more money win more often than not. But it's not because the money buys elections. It's likely that electability attracts money. Donors don't like to put their money toward what they perceive to be a losing cause. Winners attract money, but money doesn't necessarily make a winner. History is littered with big-spending losers - as Steven Dubner, Steven Levitt's coauthor, points out: Steve Forbes, Linda McMahon and Meg Whitman all outspent their competitors by sizeable amounts, to no avail. Money matters - but not in the way that people traditionally believe it does.