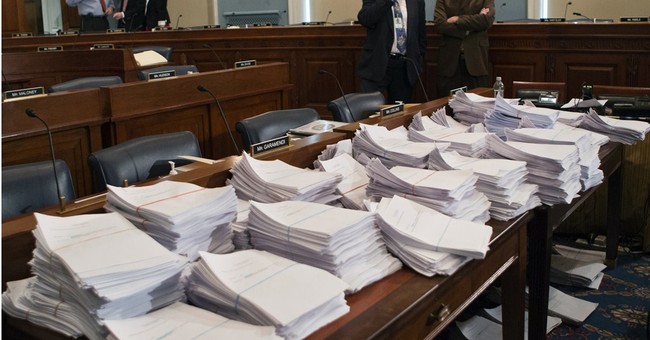 The Senate is this week taking up the "farm bill," which is a collection of subsidies, agriculture programs and food stamps targeted by conservatives for its waste. 80% of the total cost of the bill - expected to cost almost $1 trillion over ten years - goes to the Supplemental Nutrition Assistance Program (food stamps).

The cost of SNAP has skyrocketed in the Obama years as, due to the 2008 economic downturn, many more people have gone on food stamps:

SNAP has more than doubled in cost since 2008 due to the economic downturn, fluctuating food prices and eligibility requirements loosened in the 2009 economic stimulus bill.

As the Associated Press found, in 2012 alone, the program cost $78.4 billion to put 46 million people on food stamps.

There's also likely to be tricky accounting in the newest incarnation of the farm bill. Vince Smith of the American Enterprise Institute wrote that lawmakers are attempting to sell the bill as a "deficit-reduction measure," they're double-dipping in order to get a friendly budget score.

Instead of counting the bill’s savings against the previous farm bill’s budget, Senate Agriculture committee members have included the sequestration spending cuts in their savings estimates. This makes it appear as though the committee’s bill annually saves $600 million more than it actually does.

For more on what's shaping up to be a particularly bad farm bill, Diane Katz at the Heritage Foundation wrote a good intro:

Spending for the 2002 farm bill (2003–2007) totaled a whopping $241 billion. At the time of enactment, the 2008 farm bill was estimated to cost $284 billion over five years (and $604 billion over 10 years). However, significantly higher spending on crop insurance and food stamps increased actual outlays.

The most recent 10-year cost projections for last year’s Senate and House legislation are $963 billion and $950 billion, respectively, according to the Congressional Budget Office.

Congress can take important incremental steps by eliminating the most costly and indefensible subsidies. Specifically, legislators should target programs that use taxpayer dollars to cover nominal risks. They should also target farm programs that subsidize farmers regardless of whether they grow crops or earn a high income.

Here's AEI's infographic about the deceptive budgeting currently going into the 2013 farm bill: