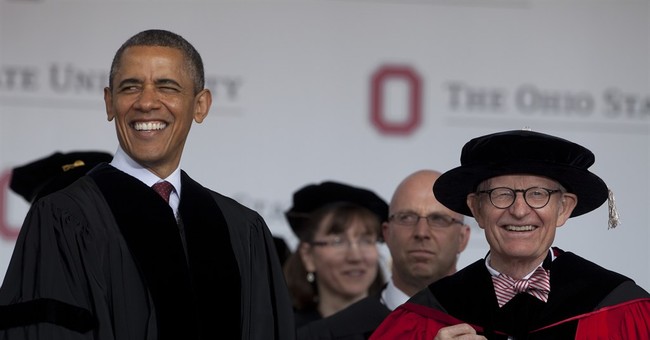 In President Obama's first speech to a joint session of Congress in 2009 outlined his administration's ambitious higher education agenda, saying that "by 2020, America will once again have the highest proportion of college graduates in the world." As Peter Wood wrote at the Chronicle of Higher Education, "that would mean more than doubling the number of domestic students attending the nation's colleges and universities."

Pushing American students toward college is a goal that was called into question by a report from the Brookings Institution this week. In "Should Everyone Go To College?", authors Stephanie Owen and Isabel Sawhill find that college is a good investment - but only for certain kinds of students. Certain degrees will provide a very high return on investment - engineering degrees from public universities, for example - but others don't give college graduates very much of an advantage over high school graduates, and leave the college grads deep in debt. Additionally, they find that choice of school matters: going into debt to get a STEM degree from a top school can be worth it, but anything other than the very best schools - and the most lucrative degrees - can leave graduates unprepared and debt-ridden for the rest of their lives.

"A huge percentage of our nation's human capital is created in on-the-job training, not through formal schooling," Vedder says.

Vedder has spent the past 44 years teaching economics and writing about the connection between higher education and the labor force. He says he has been wary of Obama's higher education agenda ever since the president told a joint session of Congress that every American should pursue some form of education beyond high school.

"When I heard that, I was somewhat shocked because I think it's an impossible dream," he says.

The Brookings authors find two conclusions: "it is a mistake to unilaterally tell young Americans that going to college - any college - is the best decision they can make... a bachelor's degree is not a smart investment for every student in every circumstance."

Indeed, Pascal-Emmanuel Gobry took a look at the Bureau of Labor Statistics report on fast-growing jobs and found that jobs of the future will not necessarily be "high skill" jobs, or ones that require a college degree:

The jobs of the future are only “low skilled” if you define “low skilled” as not requiring college. Being a good carpenter (56% growth, Jesus is still with us) or, for that matter, a good medical secretary (41% growth), takes smarts (actual smarts, not just book smarts), hard work, and dedication.

Gobry's analysis echoes Vedder's, who says found that "only five of the 25 fastest-growing occupations over the next decade require any kind of college degree."

Coming at a time when student loan debt has exploded and new college graduates are struggling to find work, this is disheartening. Embracing the rhetoric of invaluable college for everyone does not have to be the policy of the future, though. There are alternatives.

Owen and Sawhill lay out a variety of alternatives to the push for four-year degrees. Colleges could make financial information to prospective students more readily available, letting enrollees know the cost of their degrees, their expected earning potential, and the amount of debt they'll be saddled with. Colleges could work harder at graduation rate, particularly for low-income students. The financial aid system could be reformed and improved. And policymakers could push for more alternatives to traditional four-year colleges for borderline students - like associates' programs and apprenticeships.

On the point of transparency, the American Enterprise Institute's Andrew Kelly wrote last week to warn new high school grads to be wary of their choice of college and degree:

Reforms could help prospective students become better informed about their options. Though we’ve always told students that a bachelor’s degree is worth an additional $1 million, the truth is that not all college degrees are created equal. For one thing, studies have shown that similarly qualified students stand a much better chance of graduating if they attend a more selective college than a less selective one. And research on the economic returns of college reveal that wages can vary significantly across disciplines, colleges and credentials. Graduates from science, technology and math majors tend to out-earn others. It’s even true that some occupational certificate programs boast a higher return on investment, at least in the near term, than some bachelor’s degrees.

Sens. Marco Rubio and Ron Wyden have cosponsored the Student Right To Know Before You Go Act, which could provide prospective college students with some of the information they need, and would give students the opportunity to "know how long it will take them to complete their education, what their likelihood of completion is, how far that education will take them after graduation, and at what cost." And to be charitable to President Obama, he's recently endorsed increased college transparency in his "College Scorecard" initiative.

Should everyone go to college? No. The continued push to send as many young Americans to college has given some underprivileged students better opportunities, but it's also pushed unqualified prospects into a life of low earnings, limited opportunity and massive debt. Policymakers should pull back their prioritization of four-year college and re-think how we envision both our K-12 and higher education systems should look like before throwing billions more dollars at subsidizing borderline students to go to borderline universities.