Goodlatte: Strzok Has Not Answered Many Questions 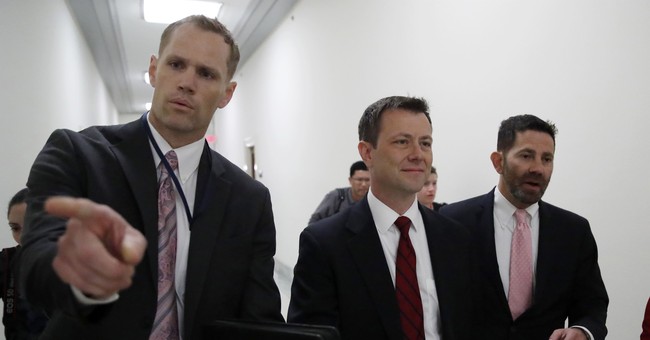 Strzok’s closed hearing went on for 11 hours, after which Republicans emerged frustrated as many of their questions remained unanswered. The hearing took place in response to a subpoena issued by the House Judiciary Committee, of which Goodlatte is chairman.

"It's a confidential briefing, but I can tell you this, we are now in the tenth hour and we have still many more questions to ask," said  Rep. Goodlatte (R-VA). However, unfortunately the FBI counsel in the room has instructed Mr. Strzok not to answer many, many questions, and that's going to be a serious problem moving forward. So we'll be raising questions with the FBI and the Department of Justice about why it is that their counsel is instructing Mr. Strzok not to answer questions,” said Goodlatte.

“Can you give use a sense of what kind of questions he declined to answer?” asked MacCallum.

Strozk has "answered many questions regarding the hateful nature" of his text messages with Lisa Page. The messages revealed his bias towards President Trump, whom he vowed to “stop” as well as his support for Hillary Clinton. Both Page and Strzok were a part of both the Clinton and the Russian investigation.

"I cannot comment on the substance of his answers, but I can say that he had many, many other texts that are now available to the public where he uses many hateful comments, obscenities, not just about then-candidate Trump, now President Trump, but (about) other people involved in this matter and groups of people. And his explanation for those are not believable," said Goodlatte.

Lover FBI Agent Peter Strzok was given poor marks on yesterday’s closed door testimony and, according to most reports, refused to answer many questions. There was no Collusion and the Witch Hunt, headed by 13 Angry Democrats and others who are totally conflicted, is Rigged!

Peter Strzok worked as the leader of the Rigged Witch Hunt for a long period of time - he got it started and was only fired because the gig was up. But remember, he took his orders from Comey and McCabe and they took their orders from you know who. Mueller/Comey best friends!

During a hearing on Capitol Hill Thursday morning, the Judiciary Committee demanded to know if Rosenstein had instructed Strzok not to answer questions.

The House is set to vote Thursday on a resolution that would “formally compel” the DOJ to turn over “all relevant documents” which Congress subpoenaed months ago, reports CNS News.

Rep. Jim Jordan (R-OH) and Rep. Mark Meadows (R-NC) have set a new deadline of July 6th for the DOJ and the FBI to turn over all the documents that Congress has long requested.