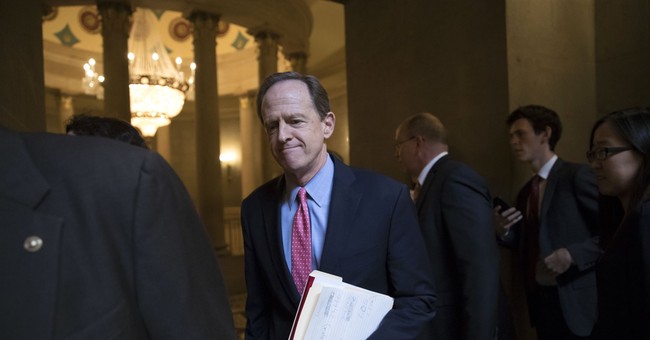 Sen. Pat Toomey (R-PA) has had the backbone to push back not only against President Trump, but against his own party as well, on the issue of tariffs.

Toomey is one of the president’s GOP critics on trade, and unlike others like Orrin Hatch, Jeff Flake and Bob Corker, Toomey is the only one not retiring. He was re-elected to his sixth term in 2016.

He has received numerous phone calls and invitations from the White House which resulted in Toomey and the president strongly, yet respectfully disagreeing on his aluminum and steel tariffs.

“And even if somehow Trump can be persuaded to exclude Mexico, Canada and Europe from the tariffs, Toomey says he will not give up on returning trade authority to Congress,” reports Politico.

“We’ve crossed the Rubicon,” Toomey told Politico in an interview. “It’s going to do and is already doing real damage, so I think we’ve got a responsibility to stand up and push back.”

Toomey also refused to reveal his support for then candidate-Trump until after the polls closed on Election Day 2016.

However, Toomey’s persuasive powers over his colleagues remain in question.  Many of Toomey’s colleagues agree with him in private, but his arguments may not be sufficient to convince them to stand up to the president.

Last week, as the family separation crisis blew through our nation’s capitol, Senate Republicans fiercely argued over confronting the president and presenting Corker and Toomey’s amendment. Even President Trump’s closest advisors and allies have criticized the proposal harshly, which would approve of national security-related tariffs.

“What we don’t want to do is undercut our commander in chief right now while he’s in the middle of these negotiations,"  said Sen. David Perdue (R-GA). "And that’s what they’re trying to do. It’s all about President Trump and some people in the Congress thinking that we’re going to get involved in every tariff negotiation. That’s a terrible idea.”

“That the normally reserved Toomey is willing to stick out his neck so far against the president underscores his passion on economic issues," reported Politico. "Toomey tends to avoid the grind of the daily news cycle and rarely criticizes Trump for his tweets or off-the-cuff remarks.”

President Trump is now making threats to place a 20 percent tariff on all European cars, if the president does so it could persuade more Senators to stand against President Trump’s tariffs with Corker and Toomey.

“It is the authority of Congress to establish tariffs,” Toomey said. “We’ve given him a lot of authority, and I think that is authority that should reside with Congress.”