On the 74th Anniversary of D-Day: Lawmakers Honor the Greatest Generation 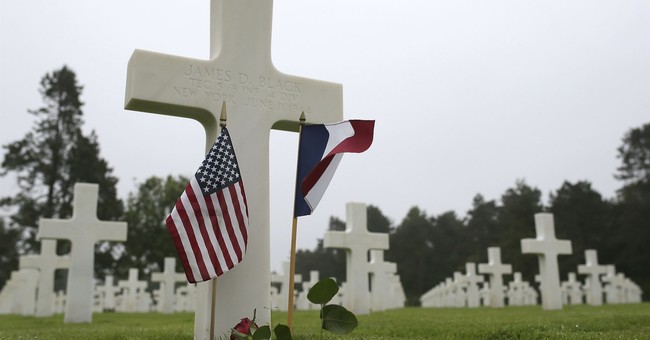 Today is the 74thAnniversary of D-Day.  On this day, June 6th, 74 years ago in 1944, Allied forces invaded Normandy beaches during WWI. It was the battle that signaled the drawing to a close of the war.   The mission was originally codenamed Operation Overlord, and today we know it as D-Day.

Roughly 156,000 American, British and Canadian forces landed along the 50-mile stretch of five different beaches which formed the coast of France’s Normandy region. There are five separate beaches that form the Normandy beaches of D-Day: Utah, Omaha, Gold, Juno and Sword.

President Trump, along with several prominent politicians and lawmakers have posted tweets in honor of the D-Day anniversary.

All of the Allied Forces who stormed the beaches 74 years ago knew it could be the last thing they would ever do: https://t.co/mhnGPvz5VN

Their courage, their bravery, and their sacrifice saved liberty around the world. #DDay

“Today we also mark another milestone, the 74th Anniversary of D-Day, the Allied invasion of Normandy... They gave their heart, their blood, and their very lives on those beaches to drive out the enemy and strike a lasting victory for our country and for freedom." pic.twitter.com/ZxZJaLzw9Q

74 years ago, U.S. & Allied troops landed in Normandy to begin the liberation of Europe. #DDay was the turning point in the most consequential fight against tyranny in history. We honor that unparalleled effort & sacrifice by standing united with our allies against tyranny today. pic.twitter.com/6cpTVMJANp

#OnThisDay more than 70 years ago, Allied troops stormed the shores of France during World War II. Today, we honor the 160,000 troops who fought their way onto the beaches and we tell the story of one Nebraskan whose work made it possible. #DDay pic.twitter.com/izniPgV3ak

On this day in 1944, 160,000 fearless Allied troops led the charge to beat the reign of Nazi terror. The heroism of these fearless soldiers will never be forgotten. #DDay pic.twitter.com/eDXYirjO5e

On this day 74 years ago, Operation Overlord and the liberation of Europe from tyranny began. Today, we remember the hundreds of thousands of soldiers who risked everything in defense of liberty and honor those who made the ultimate sacrifice. #DDay pic.twitter.com/KISNkTOYcv