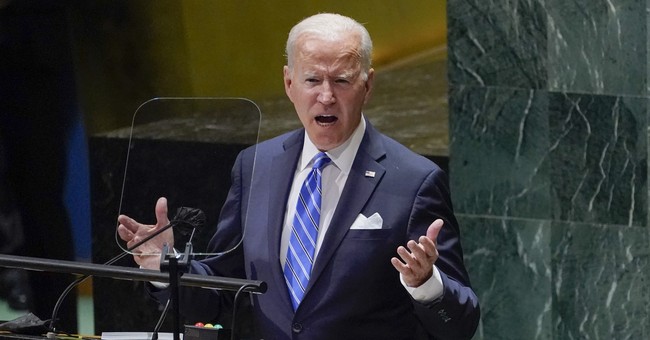 Speaking in front of the 77th United Nations General Assembly in New York City Wednesday, President Joe Biden called for the expansion of the global entity.

"Today, 193 of you, 193 member states, have willingly embraced its [UN] principles.  And standing up for those principles for the U.N. Charter is the job of every responsible member state," Biden said. "The United States supports increasing the number of both permanent and non-permanent representatives of the Council.  This includes permanent seats for those nations we’ve long supported and permanent seats for countries in Africa, Latin America, and the Caribbean. The United States is committed to this vital work."

Biden made the call without also demanding accountability for the notoriously corrupt and expensive body. The United States pays significantly more than any other country to be a member and countries like China and Russia sit on the UN Human Rights Council.

The United States remains the largest donor to the United Nations. In 2020, it contributed more than $11 billion, which accounted for just under one-fifth of funding for the body’s collective budget. That was despite President Donald Trump’s efforts to cut funding as his administration prioritized sovereignty over globalism. His administration argued that the United States incurred disproportionately large costs and that UN programs contradicted the administration’s policy stances.

The U.N.’s response to Russia’s invasion of Ukraine has been anemic. The General Assembly passed nonbinding, hand-slap condemnations. Other U.N. organizations similarly condemned Russia’s actions. But punitive measures have been largely absent. In 1974, the U.N. suspended South Africa from the organization as a punishment for its apartheid policy. But today, Russia, despite invading a sovereign nation and committing numerous war crimes, remains a member in good standing, and no U.N. sanctions have been applied because Russia can veto Security Council resolutions.

The U.N. has also failed to condemn China for its many atrocities against the Uighurs, a Muslim minority in Xinjiang Province. These include the unfair detention of more than 1 million civilians, forced labor, and torture. The United States has called China’s treatment of the Uighurs a genocide, yet China continues to sit on the U.N.’s Human Rights Council.

Then there’s the U.N.’s COVID response. The World Health Organization (W.H.O.) initially abetted the spread of the pandemic by parroting China’s deadly falsehood that there was no evidence of human-to-human transmission. Later, the W.H.O. praised China’s response, while letting Beijing impede the investigation into the origins of the disease.