Oh, So That's Where Merrick Garland is Today 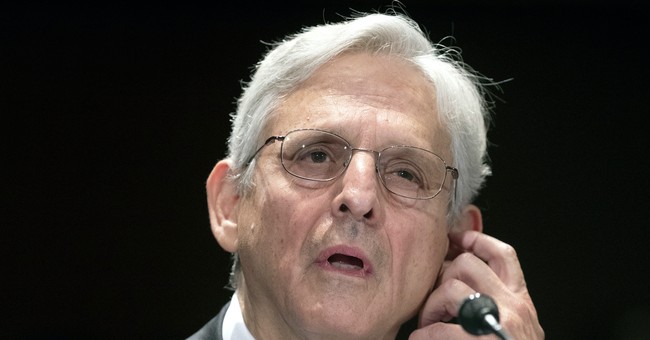 Attorney General Merrick Garland made a surprise trip to Ukraine Tuesday as the nation braces for leftist violence.

Garland's overseas trip comes as he continues his refusal to prosecute raucous protestors repeatedly breaking the law and picketing the homes of Supreme Court justices. The behavior continued over the weekend and ahead of a final ruling on Dobbs v. Jackson Women's Health Organization.

Live: Children’s Baby doll Procession heading to Amy Coney Barrett’s house, bringing alive the reality of forcing women to give birth against their will. A call for YOU to act.
Join https://t.co/h1XWlke00H #RoeVWade #RiseUp4AbortionRights pic.twitter.com/qWPHOJcP0M

“Whoever, with the intent of interfering with, obstructing, or impeding the administration of justice, or with the intent of influencing any judge, juror, witness, or court officer, in the discharge of his duty, pickets or parades in or near a building housing a court of the United States, or in or near a building or residence occupied or used by such judge, juror, witness, or court officer, or with such intent uses any sound-truck or similar device or resorts to any other demonstration in or near any such building or residence, shall be fined under this title or imprisoned not more than one year, or both,” 18 U.S. Code § 1507 on picketing or parading states.

Further, dozens of pro-life crisis pregnancy centers have been vandalized and firebombed since a draft leak of the Dobbs opinion was published in early May. Arrests have yet to be made.

Since the May 2 Supreme Court draft leak indicating the justices may overturn Roe v. Wade, abortion activists have committed numerous acts of violence or vandalism against churches, pro-life organizations, or individuals.

No Arrests Made in Attacks against Pro-Life Churches, PRCs across 12 Blue States.

Out of the 52 incidents of violent pro-life attacks since the May 2 SCOTUS draft leak, 34 have taken place in states under Dem leadership, with no records of arrests made. https://t.co/51XCItasoi pic.twitter.com/6mRDZ7ncx2

"Now the leash is off. And we will make it as hard as possible for your campaign of oppression to continue. We have demonstrated in the past month how easy and fun it is to attack," the group threatened. "We are versatile, we are mercurial, and we answer to no one but ourselves. We promised to take increasingly drastic measures against oppressive infrastructures. Rest assured that we will, and those measures may not come in the form of something so easily cleaned up as fire and graffiti."

"From here forward, any anti-choice group who closes their doors, and stops operating will no longer be a target. But until you do, it’s open season, and we know where your operations are. The infrastructure of the enslavers will not survive. We will never stop, back down, slow down, or retreat," they continued. "And for the allies of ours who doubt the authenticity of the communiqués and actions: there is a way you can get irrefutable proof that these actions are real. Go do one of your own. You are already one of us. Everyone with the urge to paint, to burn, to cut, to jam: now is the time."