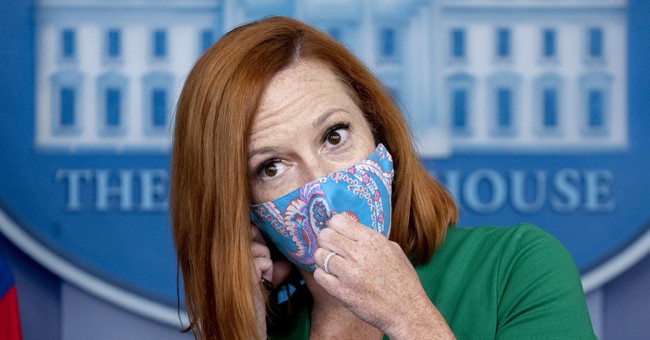 Speaking to reporters at the White House Wednesday, Press Secretary Jen Psaki mocked Americans who joyfully took off their masks earlier this week after a federal judge struck down the Centers for Disease Control mandate.

Jen Psaki claims that there was video of only "one plane" in which Americans cheered the drop of the travel mask mandate. pic.twitter.com/CYNzuTYDOl

Psaki claimed "just one" plane full of passengers reacted positively to the news. There are dozens of videos showing relieved passengers freeing their faces, with thousands of flight reactions that went undocumented.

“Ladies and gentlemen, this is your pilot speaking. This is the most important announcement I’ve ever made. The federal mask mandate is over. Take off your mask if you choose!”

Just landed after a long flight on United, during which a flight attendant announced the mask mandate had been struck down & put up a sign. When we got off, the pilots were smiling. We told them it was wonderful to see their faces again. Majority of passengers were also thrilled. pic.twitter.com/PmOSuCyI2z

Meanwhile, the Department of Justice announced Wednesday evening federal attorneys will work to appeal the decision to nullify the mask mandate after the CDC requested they do so. In a statement, the CDC declared the appeal is necessary to protect the federal agency's "authority."

"To protect CDC’s public health authority beyond the ongoing assessment announced last week, CDC has asked DOJ to proceed with an appeal in Health Freedom Defense Fund, Inc., et al., v. Biden, et al. It is CDC’s continuing assessment that at this time an order requiring masking in the indoor transportation corridor remains necessary for the public health," the statement read.

The Global Warming Narrative Just Hit a Literal Iceberg
Townhall
Hero: Lefty goes on genuinely righteous tear against the Democratic Party for 'pissing me the f**k off' [video]
Twitchy
Karine Jean-Pierre Is Collapsing and Even Her Allies Are Starting to Notice
Redstate
The Morning Briefing: Congressional Climate Cult Commies Upset That SCOTUS's EPA Ruling Would Make Them Do Their Jobs
PJ Media