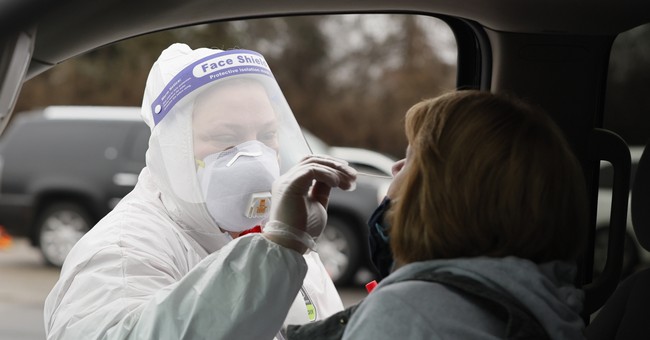 But the tests being sent to homes of Americans who order them aren't made in the United States. In fact, most of the are made in China. In addition, the Pentagon signed a $1.2 billion contract with a Chinese testing company last month for use in the U.S. military.

"Just another China question on a little bit of a different subject, which is the COVID tests that are being sent out by the federal government. The Chinese company Andon Health owns iHealth, which is one of the providers.  They signed a $1.3 billion contract with the Pentagon last month for these tests," a reporter asked. "Is the administration concerned about, sort of, both the, sort of, optics and messaging of sending something to Americans' homes that says 'Made in China' on it at the same time that you're, you know, doing this thing that you consider to be a positive good for Americans, and just kind of the overall, you know, philosophy of giving federal contracts to China?"

"Well, I would say our objective continues to be to increase U.S. manufacturing capacity of tests.  We also needed to meet a need that we had in this country for more tests and a shortage of tests and the understandable demand from people across this country to get tests and make them free and accessible, which required us purchasing some of those tests from China in order to meet that demand," Psaki responded. "But that doesn't change our commitment to increasing our U.S. manufacturing to ensure that we will be able to meet that demand with products made here in the United States over the course of time."

During a Senate Health Committee hearing in January, Ranking Member Richard Burr raised concerns about a lack of contracts with domestic testing manufactures. HHS official Dawn O'Connell confirmed contracts were for distribution of tests, not for manufacturing.

"Why should we have any confidence in these contracts if in fact we are dealing with companies that don't manufacture anything and can you assure me that the tests are coming in, are not coming from China?" Burr asked.

"These tests, what we initially did to be able access tests for the initial shipments that will go [out] towards the end of January, we worked with warehouses to see where additional tests were stored and assessed that additional capacity and are bringing that capacity to bear for these initial tests that are going out which is why you're seeing contracts with warehouses and not with test manufacturers," O'Connell said.

Senator Burr: "Can you assure me that the tests that are coming in are not coming from China?"

"Is what you're telling me they've got 50 million tests in warehouses and all we did was access that inventory?" pic.twitter.com/pyOsp9kOQK

In November 2021, the Los Angeles County Sheriff's Department was warned by the FBI that a program mandated by the county to gather testing information and other data for employees was owned by a dangerous Chinese Communist Party linked company.

I’m told some L.A. County departments have already started registering with Fulgent. An employee in the D.A.’s office sent me this letter showing he has already been threatened with disciplinary action & termination for failing to register his information with Fulgent. @FoxNews pic.twitter.com/n1QDeeqMLo

In the past China has used other testing to harvest DNA from Americans in order to study it in their labs. From a Reuters investigation:

Chinese gene company selling prenatal tests around the world developed them in collaboration with the country's military and is using them to collect genetic data from millions of women for sweeping research on the traits of populations, a Reuters review of scientific papers and company statements found.

U.S. government advisors warned in March that a vast bank of genomic data that the company, BGI Group, is amassing and analyzing with artificial intelligence could give China a path to economic and military advantage. As science pinpoints new links between genes and human traits, access to the biggest, most diverse set of human genomes is a strategic edge. The technology could propel China to dominate global pharmaceuticals, and also potentially lead to genetically enhanced soldiers, or engineered pathogens to target the U.S. population or food supply, the advisors said.