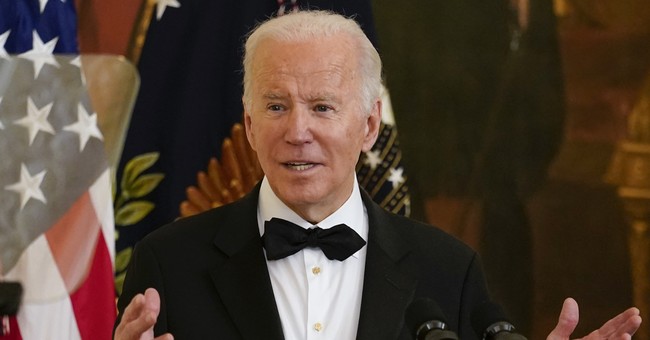 President Joe Biden spoke with a number of kids from the Executive Office Building Friday afternoon ahead of Santa's arrival on Christmas Eve.

During one of his calls, a parent signed off by telling Biden, "Let's go Brandon." Biden responded by saying he agreed. From the White House pool report:

Next kids they spoke with are in Oregon. First they talked to the dad.
Griffin, age 11, asked for a piano.
Another son, Hunter, wants a Nintendo Switch.
Another child wants a Barbie. FLOTUS said she still has her Barbie- “now ancient Barbie.”
Penelope, age 2: dad said she’d be happy with anything
Potus again reminded kids to be in bed by 9:00
Jared, the dad, said merry Christmas and Let’s Go Brandon.

Biden will spend the holiday weekend at the White House. The North American Aerospace Defense Command will track Santa as he travels around the earth.

#NORAD has located Santa delivering presents on a beach near Zanzibar, Tanzania. Curious on where Santa is headed next? Visit https://t.co/NgHFVneAui to follow #NORADTracksSanta pic.twitter.com/qCCkuCZptm

These @NationalGuardNY Airmen will be helping track Santa Claus on his important mission tonight. Will you be following along with @NoradSanta? https://t.co/g36Bx1AKBD

#Santa has had a smooth flight so far. His sleigh has just been spotted over the Taj Mahal! #NORADTracksSantahttps://t.co/Sg92KCHsqX pic.twitter.com/kbUWQAoTdV