At the UN, Biden Says American Freedom Is 'Connected' and Dependent on the Rest of the World 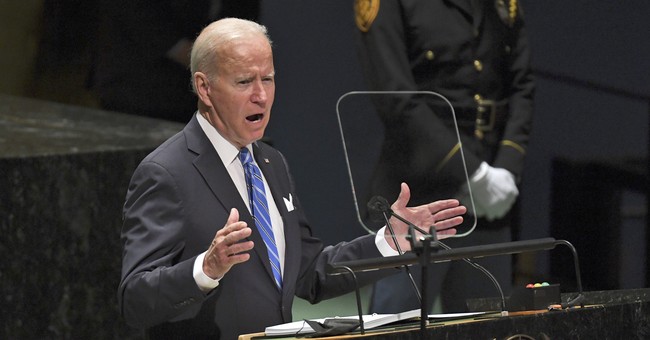 Speaking to the United Nations Tuesday morning, President Joe Biden claimed the freedom of Americans is connected to and dependent on the global community.

"There's a fundamental truth in the 21st century. Within each of our countries and as a global community, our own success is bound up in others succeeding as well. To deliver for our own people, we must also engage deeply with the rest of the world," Biden said. "Our security, our prosperity and our very freedoms are interconnected."

Biden also reassured the UN that U.S. taxpayers will foot the bill for a number of global pet projects.

BIDEN: "The extreme weather events...represent what the Secretary General has rightly called 'code red' for humanity. And the the scientists and experts are telling us that we're fast approaching a point of no return, in a literal sense." pic.twitter.com/TUGVjMbnER

House Foreign Affairs Committee Ranking Member Michael McCaul is highlighting the discrepancies between Biden's words and his actions, specifically on foreign threats to the U.S.

"President Biden's speech today does not match his actions. His failed leadership led to the chaotic and deadly withdrawal from Afghanistan that abandoned our partners, angered our NATO allies and emboldened our adversaries," McCaul released in a statement. "He's on the verge of giving Putin a major victory by allowing the Nord Stream 2 pipeline to be built, while turning his back on our Central and Eastern European partners. And his eagerness to return to the flawed nuclear deal is only encouraging Iran’s nuclear provocations. All the while, China is ratcheting up its aggression in the region and its malign influence around the world. Tough talk is useless if it’s followed by weak actions."