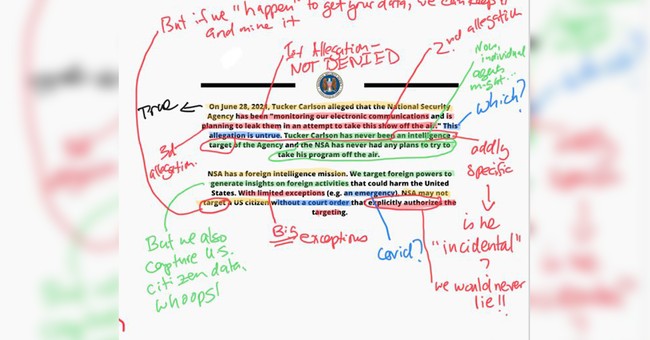 As Matt reported, the National Security Agency (NSA) released a statement Tuesday evening responding to allegations the communications of Fox News host Tucker Carlson are being monitored. They sent the statement out on Twitter and shut off replies.

A statement from NSA regarding recent allegations: pic.twitter.com/vduE6l6YWg

Civil rights attorney Harmeet Dhillon is picking apart the statement and notes the strategic language the agency is using. Attorney and Townhall columnist Kurt Schlichter argues the NSA is lying.

One thing I’ve learned is a lawyer for almost 30 years is that when somebody doesn’t give you a straight answer he is trying to lie to you. @pnjaban @RonDeSantisFL https://t.co/r5Fcxfqfey

Shortly after the NSA released the statement, Dhillon made an appearance with Carlson to further explain how the NSA spies on Americans.

"Our government regularly flouts modern security laws established in 1947 & since. They justify spying on #Americans in the name of targeting foreigners and classifying any #American data they scoop up as 'incidental,'" Dhillon tweeted about the exchange. "Even if you can prove you are being spied on, there is no legal recourse. No lawsuits against the @NSAGov have effectively been successful in stopping the spying on a particular #American citizen. Cases can last for over a decade."

"In reality, these are self-policing and secretive agencies with no effective oversight from #Congress nor the executive branch. They run rampant with their information and they weaponize it against #American citizens. That’s the truth," she continued.