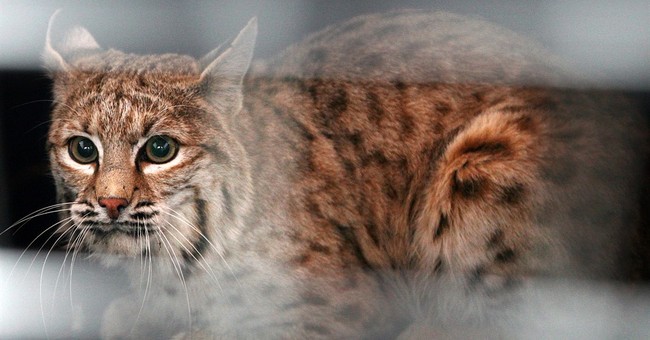 A North Carolina  man shot and killed a rabid bob cat after it attacked his wife.

Video footage shows the man putting his coffee tumbler on the front of his car, when he noticed it needs to be washed. Then, his wife walks out carrying a pet case with their cat inside. You can hear the bobcat attack her before she starts screaming for help. He rushed over, ripped off the bobcat, held it up like Simba from the Lion King and hurled it across the lawn. He then took out his pistol and followed it before it could attack somebody else. Both were bitten multiple times by the animal and have been given more than 30 rabies shots.

???? Hero mode, A-C-T-V-I-A-T-E-D! This dad goes full hero-mode when a bobcat attacks his family in their driveway. This an absolutely WILD sequence of events. ****warning there's cussing in this video**** pic.twitter.com/BalU91qVRj

??MORE DETAILS: According to the original uploader on TikTok, the bobcat WAS shot and they later found out it was rabid. The people attacked in this video have recieved treatment and rabies vaccines.

The couple shared their story with a local news station.

That couple is Happy and Kristi Wade. Kristi says she knew something was wrong as soon as she heard a growl in the driveway.

“When it came around the car and it made eye contact with me, I knew immediately I was in trouble,” Kristi said.

“It first attacked my hand that I held behind me to try to fend it off, and then I felt it crawl up my back,” she said.

“I kind of shoved my arm in there, that’s why I ended up with it face-to-face,” Happy said. “It’s not really until I get it a few steps away that I look at it and I realize it’s a bobcat and I say oh my god it’s a bobcat.”

Instead of running away into the woods, the animal ran back toward the house and into the garage. Happy says he could tell something was wrong.

“I knew because of the way it acted that this is not normal behavior for a bobcat,” he said. “Only a bobcat that was rabid would do this.”

As neighbors called 911, Happy made the decision to shoot the rabid animal. The Wades are concealed carry permit holders.

“At one point it kind of made a charge again and I was able to shoot it in the shoulder.”

Terrifying. Prayers for a speedy recovery.