Another MS-13 Gang Member Has Been Caught at the Border 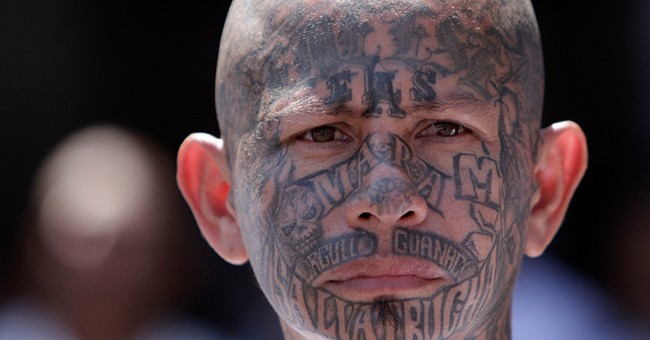 U.S. Customs and Border Protection apprehended another MS-13 gang member in the El Centro Sector late last week after he attempted to enter the country illegally through California.

"The incident occurred at approximately 3:45 p.m., when an agent assigned to the Indio Station performed a vehicle stop on a 2005 Honda Odyssey near the intersection of Spa Road and Hot Mineral Spa Road. The agent performed an immigration inspection on both driver and passenger of the vehicle," CBP released in a statement. "The driver stated he was a U.S. citizen and presented a valid passport. The passenger stated that he was a citizen of El Salvador and admitted to being illegally present in the United States. The driver was arrested and transported to the Highway 111 immigration checkpoint for further processing. The passenger was arrested and transported to the El Centro Station Centralized Processing Center for immigration and criminal history screening."

"The driver was booked for 8 USC 1324 alien smuggling and released. The vehicle was seized by El Centro Sector," the statement continues. "The passenger, a 33-year-old man, is a self-admitted MS-13 gang member. The gang member is being held in federal custody pending removal back to El Salvador."

MS-13 is one of the most violent gangs in the world and plagues a number of American communities. They operate in 42 states.

"MS-13 members engage in a wide range of criminal activity, including drug distribution, murder, rape, prostitution, robbery, home invasions, immigration offenses, kidnapping, carjackings/auto thefts, and vandalism. Most of these crimes, you’ll notice, have one thing in common—they are exceedingly violent. And while most of the violence is directed toward other MS-13 members or rival street gangs, innocent citizens often get caught in the crossfire," the FBI describes. "Members of Mara Salvatrucha, better known as MS-13, who are mostly Salvadoran nationals or first generation Salvadoran-Americans, but also Hondurans, Guatemalans, Mexicans, and other Central and South American immigrants."

MS-13 gang members are infamous for carrying out heinous crimes in public parks. Their presence was curtailed through tough prosecution and border security during the Trump administration. Open border policies under President Joe Biden enable their criminal behavior.

Four murder victims in Virginia were the random targets of a violent clique of the notorious MS-13 street gang, authorities said Tuesday.

Police and the FBI announced at a news conference that 12 members of the MS-13 "Sitios” clique in Prince William County have been charged in the killings. The homicides occurred over three months in summer 2019. Eleven of the 12 were in custody. The one being sought was believed to have fled to El Salvador.