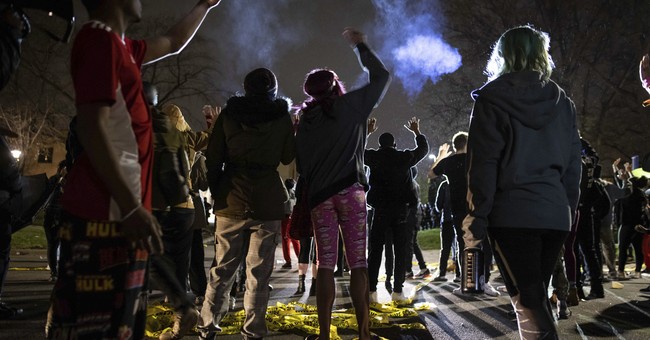 "Peaceful protest is understandable. And the fact is that we do know that the anger, pain and trauma that exists in Black community in that environment is real, serious, and consequential. But that does not justify violence," Biden said.

“Question is: Was it an accident or intentional? That remains to be determined,” Biden says of Daunte Wright. “In the meantime, I want to make it clear again: there is absolutely no justification—none—for looting. No justification for violence. Peaceful protest? Understandable.” pic.twitter.com/DYmjfJxnSd

Warning: Graphic footage, including the shooting

Here's the body camera footage of the killing of Daunte Wright that was just released. pic.twitter.com/A2X8qS8ZFH

Sunday night Minneapolis police shot and killed a man during a traffic stop. In response to the situation, Black Lives Matter activists took to the streets and rioted for hours.

Latest #BLM violence near Minneapolis sparked by police shooting of #DaunteWright. He was wanted on a warrant when he attempted to flee by car. He was shot & drove a distance before crashing into others. His FB is filled w/him flashing gang signs, using drugs & showing off cash. pic.twitter.com/StANTcJ2bs

Update: #DaunteWright was in the process of getting arrested by @BPPD for a weapons charge & escaping police before he was killed yesterday, sparking #BLM race rioting & looting. The criminal complaint says he had an illegal Ruger .45 pistol. He skipped his court date this month. pic.twitter.com/dI4zScGLo5

BREAKING: Brooklyn Center's police chief says the officer who shot Daunte Wright mistakenly drew her handgun instead of a Taser.

When asked about the shooting Monday, White House Press Secretary Jen Psaki did not condemn the riots and violence, but said President Joe Biden would be making a statement later in the day about the situation.

"We are incredibly saddened to hear about the loss of life at the hands of law enforcement in Minnesota yesterday," Psaki said. "It is a reminder of the pain, the anger, the trauma, the exhaustion that many communities across the country have felt as we see these incidents continue to occur."