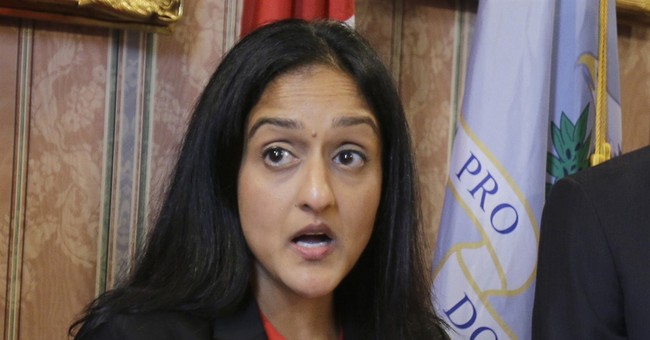 The Judicial Crisis Network has launched a new ad targeting West Virginia Senator Joe Manchin as he considers voting for the confirmation of Vanita Gupta, who has been nominated by President Joe Biden to become the next associate attorney general at the Department of Justice.

West Virginia has the highest overdose rate in the United States and Gupta owns millions of dollars worth of stock in a company accused of making a key heroin ingredient for Mexican cartels.

Vanita Gupta owns between $11 and $55 million dollars in stock in Avantor, a company that manufactures an essential ingredient used to make heroin and meth.

Gupta's father is also the chairman of the board of Avantor. /2

Between 2010 and 2018, an estimated 142,000 West Virginians died from overdoses. West Virginia suffers the highest overdose death rate of any state, and recently has been coping with an influx of heroin. /4

While Gupta was advocating for a change to the U.S. drug enforcement policy that would only further line the pockets of herself and her family, people across the United States and West Virginia suffered the devastating effects of the national heroin and meth epidemic. /6

For @Sen_JoeManchin, Gupta's history of drug-legalization extremism should be a non-starter. She's the wrong choice for associate attorney general. /7

From a 2020 Bloomberg investigation into the company:

During the decade-long U.S. heroin epidemic, Avantor has cultivated a remarkable line of business: selling acetic anhydride across Mexico in containers that are big enough to make lucrative quantities of illegal narcotics but small enough to load into the trunk of a car. Sales come via a network of distributors, online sellers, and stores spread across the country.

Without the right chemicals, it’s impossible for cartels to make two drugs that are plaguing America: heroin and methamphetamine. Avantor is one of a handful of U.S. companies that supply the legal market for those chemicals in Mexico—a market the cartels have had little trouble tapping to make narcotics on a massive scale, a Bloomberg Businessweek investigation has found. Mexico is the source of the vast majority of the heroin and meth sold in the U.S., where more than 142,000 people died from overdoses involving the two drugs from 2010 through 2018.

Further, it's a family business:

UPDATE: After the Bloomberg exposé, an opinion piece in The Philadelphia Inquirer says Avantor pulled the heroin ingredient from production last year "when Mexican officials reacted angrily to news...that a chemical the company made there had become heroin makers’ reagent of choice."