Dr. Fauci Admits to Misleading the Public on Health Information 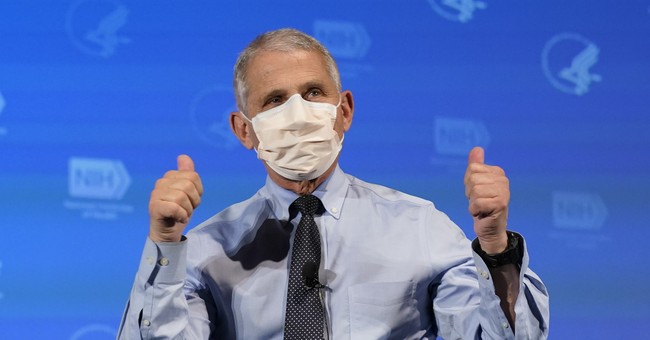 White House Wuhan Coronavirus Taskforce member Dr. Fauci admitted in a recent New York Times interview that he has been changing the numbers on herd immunity for the public based on "a gut feeling" Americans can now handle the truth. From the story (bolding is mine):

Recently, a figure to whom millions of Americans look for guidance — Dr. Anthony S. Fauci, an adviser to both the Trump administration and the incoming Biden administration — has begun incrementally raising his herd-immunity estimate.

Hard as it may be to hear, he said, he believes that it may take close to 90 percent immunity to bring the virus to a halt — almost as much as is needed to stop a measles outbreak.

Dr. Fauci said that weeks ago, he had hesitated to publicly raise his estimate because many Americans seemed hesitant about vaccines, which they would need to accept almost universally in order for the country to achieve herd immunity.

Dr. Anthony Fauci has been slowly but deliberately moving the goal posts on when herd immunity is possible. He is doing so, he said, partly based on new science, and partly on his gut feeling that the U.S. is finally ready to hear what he really thinks. https://t.co/W7hVXpoF0X

Early on in the pandemic, Fauci declared that Americans should not wear masks. Now, he demands they wear one, nearly at all times, and says they should continue to do so even after they are vaccinated. From a CNN interview last weekend:

Recommended
A Number of IRS Employees Have Been Indicted
Katie Pavlich

TAPPER: Once somebody has been immunized -- I guess, for Pfizer, it's two doses. I'm not sure what it is for Moderna or the other vaccines coming down the pike.

But once it's -- once the process is complete, does that mean they can take off their masks, they don't have to social distance, they can just go about their lives as before?

Obviously, with a 90-plus percent effective vaccine, you could feel much more confident. But I would recommend to people to not abandon all public health measures just because you have been vaccinated, because even though, for the general population, it might be 90 to 95 percent effective, you don't necessarily know, for you, how effective it is.