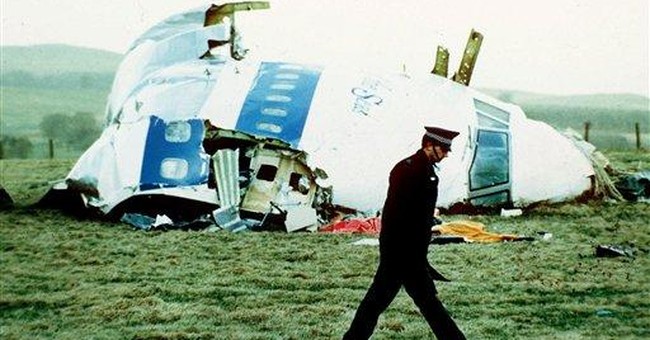 Speaking from the Department of Justice Monday morning, Attorney General Bill Barr announced federal charges against Abu Agela Masud. Masud, who worked under former Libyan dictator Muammar Gaddafi, is believed to have made the bomb onboard Pan Am Flight 103, which blew up over Lockerbie, Scotland. He is currently in Libyan custody and is expected to be extradited to the United States for prosecution.

"On this day 32 years ago, December 21, 1988, at 7:03 p.m. local time, a bomb destroyed Pan Am Flight 103 as it flew 31,000 feet above Lockerbie, Scotland.  The massive Boeing 747 plane, known as the “Clipper Maid of the Seas,” exploded and fell to the ground in countless pieces scattered across 840 square miles, nearly the entire width of Scotland.  The explosion killed all 259 people on board, 243 passengers and 16 crew members, including 190 Americans.  Falling debris claimed the lives of 11 Lockerbie residents on the ground, many of whom were in their homes and had just sat down for dinner.  The Lockerbie bombing remains the deadliest single terrorist attack in the history of the United Kingdom, and the second deadliest terrorist attack for Americans, surpassed only by the 9/11 attacks," Barr said.

"Immediately after the bombing, the FBI partnered with law enforcement agencies from Scotland to investigate.  That joint investigation led to the filing of charges in 1991 against two Libyan intelligence officers.  The investigation also pointed to another conspirator, a man known by the name Abu Agela Masud. But at the time, investigators were unable to identify or locate that suspect," he continued. "I am pleased to announce that the United States has filed criminal charges against the third conspirator, Abu Agila Muhammad Mas’ud Kheir Al-Marimi, for his role in the bombing of Pan Am Flight 103. Let there be no mistake: no amount of time or distance will stop the United States, and its partners in Scotland, from pursuing justice in this case."

32 years ago tonight I rushed to Lockerbie for the BBC after the bomb on Pan Am flight 103 killed 259 people onboard & 11 in the town. Twisted metal everywhere, so sharp it punctured the soles of my shoes. Half a street was flattened. On this day I think always of those people pic.twitter.com/m3Kowj7Lkl

On this day in 1988, 270 innocent people were killed in a horrific act of terrorism. The Lockerbie bombing was one of our darkest hours. My thoughts are with all of those remembering loved ones and friends who they were never to see again. pic.twitter.com/IxNHio8D2Q