Republicans Praise Barr: A Warrior for Free Speech and Against Violent Crime 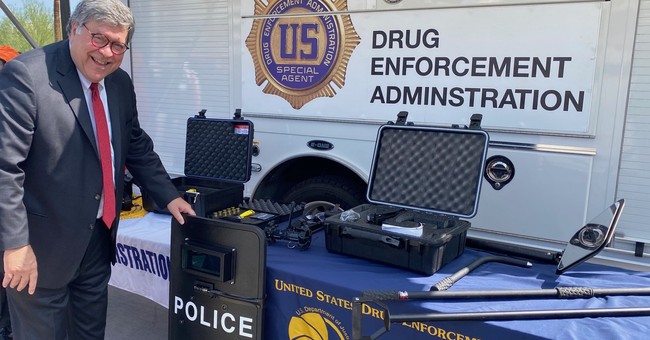 Late Monday afternoon, President Trump announced Attorney General Bill Barr has resigned and will leave his position at the Department of Justice on December 23.

The resignation has prompted an outpouring of support from top Republicans.

“Attorney General Barr is one of the most dedicated and capable public servants I have ever seen in action. For nearly two years, he’s provided wise counsel to President Trump and rendered outstanding service to our country. He has helped keep America safe from criminals and terrorists and advanced the bedrock American value of equal justice under law.

“When his country came calling two years ago, Bill Barr did not have to answer. He had already completed a distinguished career in government. He had already led the Department of Justice, having been confirmed by a voice vote to serve President Bush 41 as one of the youngest Attorneys General in our nation’s history. He had a wildly successful private-sector career. Fortunately for the nation, his dedication to the men and women of the Department of Justice compelled Attorney General Barr to clock back in.

“In a time of intense polarization, and notwithstanding unfair criticism from the far left and the media, Attorney General Barr did his work with clarity, principle, and professionalism. He fostered greater accountability in the DOJ and confronted the egregious abuses surrounding the FBI’s handling of the 2016 election. He worked to protect innocent Americans from violent crime and protected our nation’s capital and its historic monuments when peaceful protests were hijacked by violent rioters. He fought against China’s lawbreaking and corrosive influence. He was a warrior for religious liberty and free speech who ensured that DOJ safeguarded these liberties even during a pandemic. And he stood for the simple but apparently controversial proposition that the federal government should actually enforce the laws on the books, in subjects from immigration and border security to the death penalty that federal law reserves for the gravest offenses.

“Now, for a second time, Attorney General Barr will leave the Department and the rule of law in this country stronger than he found them. He has more than earned a return to private practice and more time with his family. I warmly wish him and his family the very best.”

“I have nothing but total respect and admiration for the job done by William Barr as Attorney General of the United States.

“As Attorney General, Mr. Barr vigorously pursued the corruption that was Crossfire Hurricane and has made a real genuine effort to restore credibility to the Department of Justice after the leadership of Comey and McCabe.

“Attorney General Barr has much to be proud of. When it came to the law, he played it straight and has set in motion many reforms to the FISA process that will pay dividends over time and, under his leadership, the Department has taken a very hard look at social media platforms.

“William Barr was the right man at the right time in overseeing highly political investigations and stood in the breach at times against both the left and the right. America has greatly benefitted from the service of William Barr as Attorney General, and I wish him well in all future endeavors.

“I have tremendous confidence in Deputy Attorney General Rosen, who will now be the acting Attorney General. He is a good man and will be an ethical leader and a steady hand at the Department of Justice.”

"Bill Barr is a friend and patriot. Despite the vilification in the media, the political targeting, and attacks against his character, Bill stepped forward to lead the Department of Justice with integrity and fidelity to the rule of law. He has served his country with honor and distinction. He shed light on the weaponization of the Department of Justice under the Obama-Biden administration and sought to restore confidence in our justice system. Bill has not been a Republican Attorney General or a Democrat Attorney General; he’s been an Attorney General dedicated to following the law and defending the Constitution. His retirement – though a loss for the country – is well deserved. I wish him and his family well in this next chapter.”