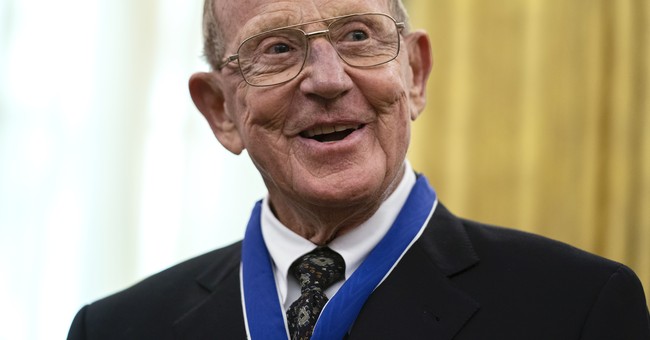 Beloved College Football Coach Lou Holtz was awarded the Medal of Freedom by President Trump at the White House Thursday.

"America recognizes Lou Holtz as one of the greatest football coaches of all time for his unmatched accomplishments on the gridiron, but he is also a philanthropist, author, and true American patriot. After growing up in a small town in West Virginia, Holtz attended Kent State University, becoming the first member of his family to enroll in college. At Kent State, Holtz played football, studied history, and joined the Army Reserve Officers’ Training Corps. For the next 7 years, he honorably served as an Officer in the United States Army Reserves. When asked about his service during an interview with the American Legion, Holtz said, 'I was taught at an early age that I had an obligation to serve my country,'" the White House released in a statement. "This prestigious award is the Nation’s highest civilian honor, which may be awarded by the President to individuals who have made especially meritorious contributions to the security or national interests of the United States, to world peace, or to cultural or other significant public or private endeavors."

During the ceremony, President Trump called Holtz "one of the greatest coaches in American history."

"I want to show you how proud I am not only to receive the award, but proud to receive it from President Donald Trump, who I think is the greatest president of my lifetime," Holtz said.

Coach Lou Holtz: President @realDonaldTrump is the greatest President of my lifetime pic.twitter.com/s2pQzgKAr3

Republican Senator Lindsey Graham was at the event and congratulated Holtz on the milestone. Behind the scenes, Graham pushed for Holtz to receive the award.

I truly appreciate President @realDonaldTrump awarding the Medal of Freedom to Coach Holtz because he is so deserving for many different reasons.

He’s one of the greatest coaches in the history of college football and an even better person!

Earlier this year Holtz gave a speech at the Republican National Convention and encouraged Americans to give President Trump a second term in the White House.