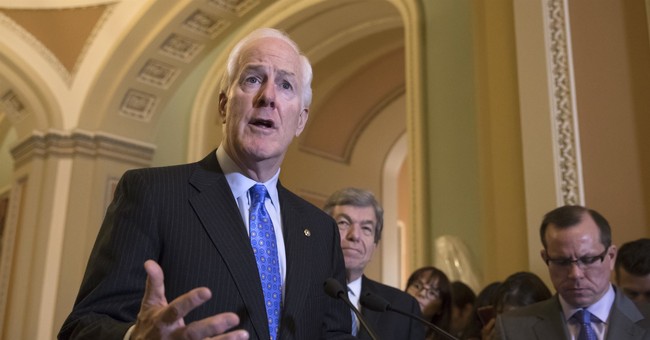 Texas Republican Senator John Cornyn took to the Senate floor on Monday and explained what it would take for him to vote against former Vice President Joe Biden's nominees.

"As America waits for the results of the 2020 election to be certified in a couple of weeks, former Vice President Joe Biden has begun to announce his picks for Cabinet and other high ranking positions. Some of these nominees have close ties to investment and other consulting firms whose clients are largely unknown or maybe subject to a non-disclosure agreement. The truth is these individuals could be working on behalf of a feel good non-profit, a malicious foreign actor, or a large company with business before the government. The truth of the matter is we have simply no idea what kind of business or financial relationships these individuals have with foreign powers that could influence their actions as high ranking government officials," Cornyn said. "This goes way beyond compliance with the Foreign Agents Registration Act. This is an ethical issue. It's a conflict of interest issue and Americans deserve to know if these nominees have connections or relationships that could cloud their judgement on behalf of the American people if confirmed."

"I will not support any nominee who doesn't provide full transparency into their work on behalf of a foreign government. I will not do it. The American people deserve to know if these or any future nominees are beholden to anything other than our national interest," he continued. "Full transparency is the only option."

Sen. Cornyn: "I will not support any nominee who doesn't provide full transparency into their work on behalf of a foreign government. I will not do it. The American people deserve to know if these or any future nominees are beholden to anything other than our national interest." pic.twitter.com/D7hmDZ0Pu5

But foreign money or influence won't be the only reason nominees are rejected. Cornyn's communication's director has made that clear.

Neera Tanden, who has an endless stream of disparaging comments about the Republican Senators’ whose votes she’ll need, stands zero chance of being confirmed. https://t.co/f6Ewi6OMQR