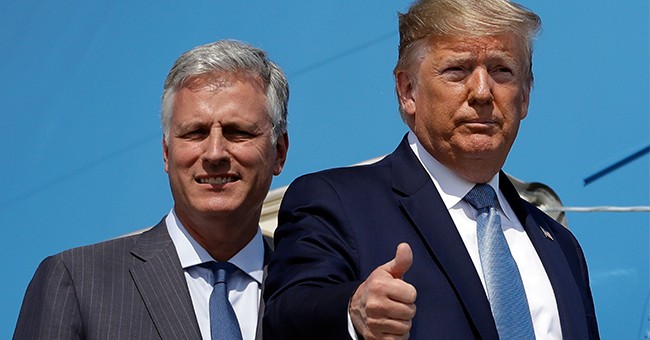 "The United States welcomes the release today of US citizens Sandra Loli and Mikael Gidada from Houthi custody in Yemen.  We send our condolences to the family of Bilal Fateen whose remains will be repatriated as well.  We extend our sincerest thanks to Sultan Haitham bin Tariq of Oman and King Salman of Saudi Arabia for their efforts to secure the release of our citizens," O'Brien released in a statement. "President Trump continues to prioritize securing the release and repatriation of Americans held hostage abroad.  We will not rest until those held are home with their loved ones. President Trump has brought home over 50 hostages and detainees from 22 countries since taking office."

BREAKING/Exclusive: Two Americans held by Iran-backed Houthi fighters in Yemen have been freed in exchange for return of more than 200 militants to Yemen. News breaking at @WSJ

A Royal Oman Air Force plane carrying the two Americans and the remains of a third flew out of Yemen’s Houthi-controlled capital of Sana’a, hours after the jet and a companion flight brought hundreds of militants back to the country following years stuck in Oman.

The deal secured freedom for Sandra Loli, an American humanitarian worker who was held hostage by the Houthis for about three years, and Mikael Gidada, a U.S. businessman who was held for about a year, said Kash Patel, a deputy assistant to President Trump who worked on the deal.

The pact also included the return of the remains of Bilal Fateen, a third American who had been held by the Houthis. U.S. officials provided only limited information on the three Americans but did say that they had been working urgently to secure the deal because Ms. Loli’s health was in decline. The deal also included delivery of medical aid for Yemen.

Meanwhile, the administration and Congress continue to work to bring remaining hostages held overseas home as soon as possible.