Pompeo Calls on Saudi Arabia to Normalize Relations With Israel 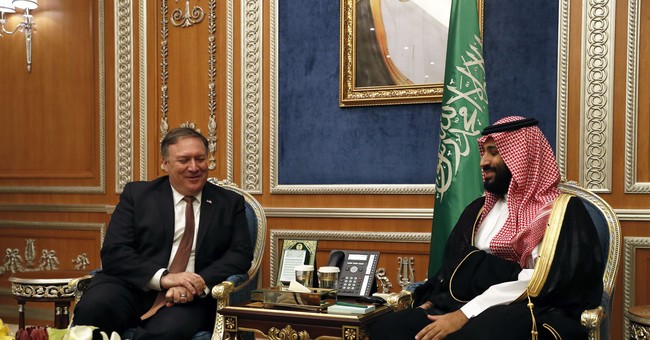 Speaking to reporters from the State Department Wednesday, Secretary of State Mike Pompeo called on Saudi Arabia to join Bahrain and the United Arab Emirates in normalizing relations with Israel. During his remarks, he was joined by Saudi Foreign Minister Faisal bin Farhan.

"We hope Saudi Arabia will consider normalizing its relationships as well, and we want to thank them for the assistance they’ve had in the success of the Abraham Accords so far,” Pompeo said.

Pleased to launch the U.S.-Saudi Strategic Dialogue in Washington with Saudi Foreign Minister @FaisalbinFarhan. We look forward to reinforcing our enduring partnership by expanding our defense and energy cooperation and increasing cultural and educational exchanges. pic.twitter.com/ZMcfAHCZsk

"We're here this afternoon to change the course of history. After decades of division and conflict, we mark the dawn of a new Middle East," Trump said in September. "Today’s signing sets history on a new course and there will be more countries to follow these great leaders."

“On my first foreign trip as President, I had the honor of addressing the leaders of more than 54 Arab and Muslim nations in Saudi Arabia. My message that day was very simple: I urged the nations of the Middle East to set aside their differences, unite against the common enemy of civilization, and work together toward the noble aims of security and prosperity," he continued.