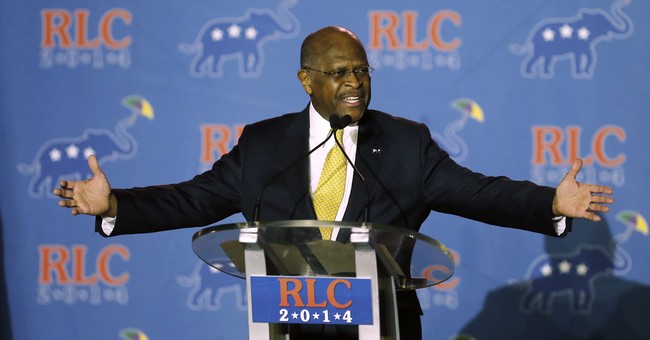 "Let me begin by expressing our sadness of a wonderful man and a dear friend of mine, Herman Cain. He was a very special person. I got to know him very well and unfortunately he passed away from a thing called the China Virus. We send our prayers to Herman's great wife Gloria, wonderful family," Trump said. "And I have to say, American grieves for all of the 150,000 Americans who had their lives taken by this horrible, invisible enemy. We mourn their loss as a nation. We mourn their loss as people, as people that love one another and we are working very hard not to only contain this horrible event, this horrible plague, it's what it is, a plague, but also to come up with therapuedicts and vaccines and we're making a lot of strides."

...the phone with his amazing wife Gloria, daughter, Melanie, and son Vincent to express my deepest condolences to the entire family. @FLOTUS Melania and I loved Herman Cain, a great man. Herman, Rest In Peace! pic.twitter.com/GNUf5jHjX0

On Thursday morning Cain's family, friends and staff announced his passing after a long battle against the disease.

"You’re never ready for the kind of news we are grappling with this morning. But we have no choice but to seek and find God’s strength and comfort to deal with it. Herman Cain – our boss, our friend, like a father to so many of us – has passed away. He’s entering the presence of the Savior he’s served as an associate minister at Antioch Baptist Church in Atlanta, and preparing for his reward," Dan Calabrese wrote. "Herman was 74. Although he was basically pretty healthy in recent years, he was still in a high-risk group because of his history with cancer. We all prayed so hard every day. We knew the time would come when the Lord would call him home, but we really liked having him here with us, and we held out hope he’d have a full recovery."