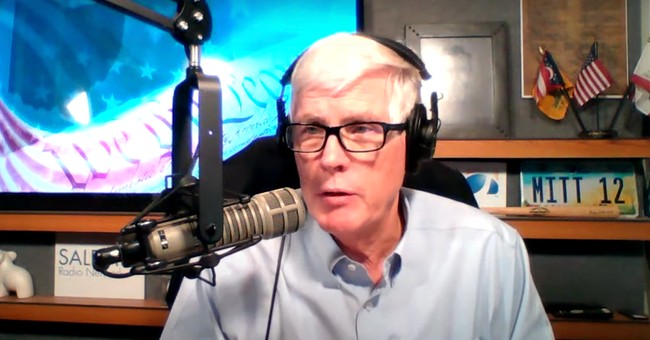 During his radio show Thursday morning, conservative radio host Hugh Hewitt unloaded on members of the "mainstream" media for screwing up yet another story on Russia. He also responded to CNN's John Harwood, former AP reporter Ron Fournier, ABC Political Analyst Matt Dowd and others for attacking his presentation of the facts.

"They don't want to believe the facts because they hate Donald Trump. They have Trump derangement syndrome. They have lost their collective minds. Moreover, they are cowards," Hewitt said. "When you're in the media and you're attacked like I am by these three individuals and many others, for reporting the facts, it calls to mind and sets in relief the problem we have in American today and that's the media is broken, deeply deeply broken."

"I actually have sources in the White House, very good sources. I actually talk to people in the Oval Office. I talk to people in the National Security Council apparatus. I talk to the Secretary of State. I talk to the Secretary of Defense. I talk to Senators and Congressmen. I actually am the best sourced journalist in Washington D.C., right now, today," he continued, talking about a recent New York Times story alleging Russia paid Taliban terrorists to kill U.S. troops in Afghanistan. "So I actually know this story up and down...I know the Russia bounty story was not briefed to the President because the CIA senior briefer did not believe it was worthy and trustworthy and did not want to give to the President bad intel. The New York Times screwed it up again."

Hewitt invited Harwood on his show to discuss the story. Harwood refused.

This AM ?@JohnJHarwood? did a drive-by Tweet at me in an attempt to drag me for my comment on the Russian bounty story. I invited him on. Repeatedly. He can text or DM me and has in the past. He didn’t respond. Others with TDS joined in. I responded: https://t.co/VHzSmLSiO7

John, the next segment is open as well. So is my invitation to call in. You can count on courtesy. We can compare sources on the Russian bounty "story. Mine are impeccable. Your drive-by tweet is an art form, but your crickets in response to the invitations are more telling. https://t.co/92ZPrDvmsv

"What has the press gotten right about Russia in the last three years?" @JimTalent to me just now about the Russian bounties "story." The former senator went on to explain why every administration is handicapped in knocking down false accounts like the @NYTimes one.