DOJ Announces Hundreds of Arrests to Bring Down a Mexican Cartel 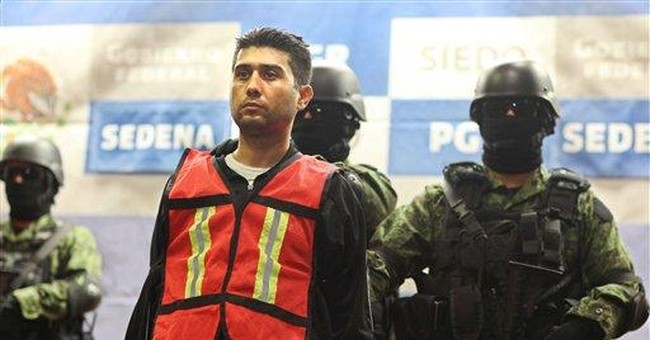 The Department of Justice announced a major crackdown on a Mexican drug cartel operating in the United States and south of the border this week, revealing "Project Python" resulted in more than 600 arrests and 350 indictment for serious crimes. The operations of Cártel de Jalisco Nueva Generación (CJNG) were at the center of the operation, which was led by the Drug Enforcement Agency.

“When President Trump signed an Executive Order prioritizing the dismantlement of transnational criminal organizations, the Department of Justice answered the call and took direct aim at CJNG.  We deemed CJNG one of the highest-priority transnational organized crime threats we face.  And with Project Python, we are delivering results in the face of that threat for the American people,” he continued.

Further, the Treasury Department issued sanctions on a number of businesses linked to Mexican cartels this week.

"The United States is committed to preventing and combating narcotics trafficking globally.  The U.S. Department of the Treasury’s Office of Foreign Assets Control (OFAC) yesterday designated four Mexican businesses pursuant to the Foreign Narcotics Kingpin Designation Act (Kingpin Act) due to their links to the Cartel de Jalisco Nueva Generacion (CJNG) and the Los Cuinis Drug Trafficking Organization (Los Cuinis), two of the most powerful drug trafficking organizations in Mexico," Secretary of State Mike Pompeo released in a statement earlier this week.

According to the Treasury and State Departments, the sanctions apply to the following businesses: